Shelhigh Medical Devices, the Union, NJ, manufacturer of tissue-based medical devices, virtually shut down by court order in a lawsuit started by the Food and Drug Administration in April, wants to keep you in the dark. Shelhigh wants you to believe that its products won't cause infection in surgery patients, and that it has been framed by the mean old FDA.

But it turns out you can't trust what Shelhigh says at all—about the FDA's complaints or about an agreement reached with the FDA in court about a month ago. 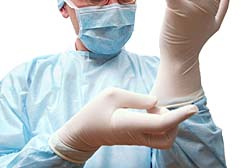 Shelhigh is a manufacturer and distributor of tissue-based medical devices, implanted in patients during surgery, including during organ transplant operations. On April 17, the FDA had U.S. Marshals seize all devices at the company's plant in Union pursuant to a court order granted that same day. That order was founded on facts alleged in an 11-page written statement (the "Complaint") filed by the FDA.

In Part 1 of this article, I set out the misinformation campaign Shelhigh launched with its press release the day after the seizure.

And here's the story on Shelhigh's white-wash of the settlement it reached with the FDA in June.

Shelhigh's press release said, in effect, that all was settled by their hiring independent investigators to look into the plant practices, and they were now in the process of getting their products approved and out the door again. They also said that the FDA confirmed there had been no recall of Shelhigh products.

No recall? Isn't a complete shut-down of a business worse than a recall?

In fact, the Consent Order, granted by a judge June 22, runs to 23 pages, and features costly and onerous hoops for Shelhigh to jump through before it can even begin to manufacture or ship out product again. Here are a few of the requirements set out in the order, which just give you a taste of the entire thing:

And again, this is just a sample of the requirements set out in the consent order.

Caveat emptor means buyer beware. When it comes to Shelhigh, the buyer should beware of the story the company is trying to sell.