Nearly a quarter million people today are carrying implantable cardiac defibrillators (ICDS) in their chests that use Medtronic Sprint Fidelis leads. If someone's heartbeat suddenly becomes dangerously irregular, these medical devices are supposed to apply a properly calibrated electric shock to restore normal heart function and save a life.

The only trouble is, these things can kill you. We know this because they've already taken the lives of at least five people they were supposed to protect. Many, many others have been shocked at the wrong time; still others not at all.

The cause is the poorly designed Sprint Fidelis wire leads that go from the ICDs into the wearer's heart. They're thinner than earlier models, and we now know that they can fracture and malfunction much more easily. The guilty party is Medtronic Inc., who designed, manufactured, and sold the defective devices. And there's no safe way to fix the problem; the surgery required to replace the Sprint Fidelis leads is delicate, dangerous, and, according to Medtronic, a greater risk than leaving the Sprint Fidelis leads in place. 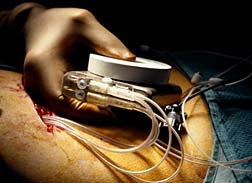 How do these things happen? Attention has focused increasingly upon the federal Food and Drug Administration (FDA), the government regulatory agency responsible for approving and monitoring medical devices. Once well staffed, adequately budgeted, and reasonably efficient, over the past few years the FDA has fallen victim to the "starve the beast" mentality of anti-regulatory ideologues in Washington.

According to the Boston Globe, FDA's budget in real dollars is now about 20 percent below what it was 14 years ago. Its workforce is down by over 1300 for the same period. One result among many others is that FDA personnel can now inspect the manufacturers of medical devices such as Medtronic every three years instead of the agency's own required two years.

We only learned of the Sprint Fidelis problems from Medtronic themselves, and then only because of the five reported deaths caused by Sprint Fidelis failures. The Sprint Fidelis was voluntarily taken off the market by Medtronic, not by FDA order. The agency is in crisis; the Globe describes it as "condition critical".

More News
If the same Supreme Court that appointed a president in 2000 also decides that Medtronic—and, by extension, all medical equipment manufacturers—is shielded from state-level legal action, the Congress could pass legislation nullifying the decision. That's not as easy as it sounds, of course. To invoke cloture (end debate) and bring a bill to a vote in the Senate requires 60 votes out of 100 senators. Keeping that from happening would be a prime objective of the companies' lobbyists. And for the record, the past congressional session saw a record number of bills die from lack of cloture.

If the Senate minority can (as they did) kill a bill increasing funding for children's health insurance, it can even more easily kill one that removes legal shielding from the likes of Medtronic.

And finally, if you're thinking that the odds are getting worse for victims of negligence and fraud by medical industry companies, you're probably right. If you're one of them, the time to raise your voice is now.