Harassment: A Form of Discrimination

Harassment is a form of discrimination. It is defined as any form of unsolicited, deliberately offensive behavior that has been requested to be stopped. This behavior can be physically violent or psychologically damaging. If someone says or does something to make you feel uncomfortable, or if you are put at risk in any way, that constitutes harassment.

Even in this day and age, harassment is pervasive throughout the U.S. Sexual and racial harassment are the most common -- such as the supervisor at work promising a promotion in return for sexual favors or someone saying, "You're real clever for a black guy."

But harassment could also involve the neighbors from hell, a bully in the classroom, or a stalker. People are harassed for a multitude of reasons, from their political or religious beliefs to the way they look. 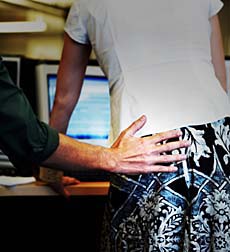 Sexual Harassment:
Unsolicited sexual attention, such as remarks about your looks or dress that make you feel uncomfortable. Sexual harassment can include:

By law, sexual harassment is considered to be a form of sex discrimination under Title VII of the Civil Rights Act of 1964. The Equal Employment Opportunity Commission (EEOC) defines sexual harassment as "unwelcome sexual advances, requests for sexual favors, and other verbal or physical conduct of a sexual nature constitutes sexual harassment when submission to or rejection of this conduct explicitly or implicitly affects an individual's employment, unreasonably interferes with an individual's work performance or creates an intimidating, hostile or offensive work environment."

Racial and/or Ethnic Harassment:
Any comment or action that denotes or promotes racial stereotypes and hatred. Racial harassment can include:

Gender or Sexual Orientation Harassment:
Offensive behavior toward an individual or group based on prejudice toward their gender or sexual orientation.

Workplace Harassment
Someone you are in contact with because of your work, such as your boss, co-worker or a customer, who harasses you while you are performing your job. Workplace harassment includes to and from work as well as at the workplace. Ultimately, your employer is responsible for any kind of harassment that affects you at work.

What You Can Do
Harassment victims are often made to feel powerless, especially in the workplace. It may be ongoing and they have come to accept it; they may have been told to keep quiet or get fired. But there is a lot of support for harassment victims and a lot can be done to stop the abuse, from informal complaints to filing a lawsuit against the responsible parties.

More News
If you think that you have been harassed in any way, you should tell someone you trust immediately -- for the record. Any comments or slurs that make you feel uncomfortable should be noted.

If harassment has occurred at work, your company may have policies and procedures in place for filing a complaint. There may be someone in HR or a co-worker responsible to receive harassment complaints. If not, you should complain to your immediate supervisor.

Keep in mind that harassment won't go away if you don't speak up; it may happen to someone else; if it happened in the workplace, chances are, you aren't alone. If you allow harassment to continue, it can upset your home life, your relationships and your health.

To find out about anti-harassment court orders, visit the [Washington Courts website]

If you can't resolve the problem yourself, you may decide to make a legal complaint. You may may send your complaint to a [Harassment Lawyer] who will review your claim at no cost or obligation.
Request Legal Help Now

Posted by
mario thomas
on November 1, 2015
I am being harassed by control lead and employee at my job I'm all out of options at this point. I made several complaints to 2 different supervisors nothing has change my job is being affected by this harassment. I was pulled in the office and was talked to about my job performance when in 8 months previous no complaints no evaluations either no missed or late days. It was put on break sheet that myself and the other employee was not to take our breaks at the same time when we work 2 different shifts our breaks shouldn't even run by each other but this control lead knowing and willing did it on my first break and tried to do it again on my 30 minute lunch but I had to wait 15 extra minutes for my lunch so I had to cut my last break which was 5 minutes supposed to be 15 minutes because this control lead sent me on my last break and 5 minutes later sent this other employee on break this has been going on for 3 months with several made complaints to supervisors and management
Posted by
cliff
on August 8, 2013
can a supervisor telling someone "you dont want to work here" be considered a form of harrasment?