Fire Accident: Not So Sweet for Imperial Sugar

Fire accidents come in many forms and have many causes—from grease catching fire on the stove, to an errant spark from a campfire burning down a forest. Some fires are set deliberately. Others are accidental. All pose threats to life and property, and sometimes lives are lost.

Sometimes, there is negligence that can result in litigation. 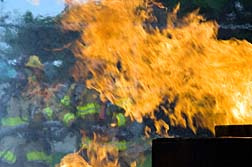 In almost every instance, a fire accident could have been prevented through due diligence and precaution—litigation usually happens when those precautions are not fulfilled, and innocent people are negatively impacted.

Such was allegedly the case with the Imperial Sugar Company after a devastating explosion and fire earlier this year at the firm's Port Wentworth refinery claimed 13 lives, with 40 others suffering some form of fire injury.

Incredibly, six months to the day after the explosion, which occurred February 7th, three employees are still in hospital due to complications from their injuries.

The Occupational Safety and Health Administration (OSHA) came down hard on the company after their fire accident investigation, issuing citations and penalties against the company which combine to suggest fines totaling well over eight million dollars.

If ratified, the proposed penalties would represent the third largest fine in the history of OSHA.

"I am outraged that this company would show a complete disregard for its employees' safety by knowingly placing them in an extremely dangerous work environment," said Assistant Secretary of Labor for Occupational Safety and Health Edwin G. Foulke Jr.

OSHA's inspections of facilities in Port Wentworth, GA and Gramercy, LA uncovered large accumulations of combustible sugar dust in workrooms, on electrical motors and on other equipment. The agency's investigation also determined that officials at the company were well aware of the existing conditions, but took no reasonable action aimed at reducing the obvious hazards.

Meanwhile, Folke Jr. wasn't quite finished. "What is even worse is that a month after the devastating catastrophe in Port Wentworth that claimed the lives of 13 people, this company had done little to ensure abatement of the combustible dust hazards at its other plant. If OSHA investigators had not inspected and posted an imminent danger notice regarding areas at the second plant, the same thing could have happened again."

Under the Occupational Safety and Health Act of 1970, employers are responsible for providing a safe and healthy workplace for their employees. It is not known whether those workers who were inured, or the families of those workers killed, have any plans for litigation. However, in view of the severe lashing by OSHA and a litany of indiscretions, lawsuits appear likely.

Yes, this one will most assuredly end up in the courts of law.

If you have suffered losses in this case, please send your complaint to a lawyer who will review your possible [Fire Accident Lawsuit] at no cost or obligation.
Request Legal Help Now