It may have happened 10 years ago, but a fire that broke out in a decrepit housing complex in New York state that took the life of an eight-year-old child still stings—so much so that a state assemblyman continues his quest to have state legislation passed with an aim toward improving current statutes regulating landlords and the buildings under their control. 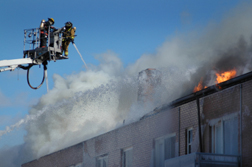 A fire accident can have numerous causes—smoking in bed, grease catching on the stove or combustibles stored too close to a heat source.

But a large number of fire accidents are electrical in nature. Such is the suspicion regarding a fire that took the life of a 94-year-old woman in Newark, Ohio. Gussie Moorer lived alone with her cat. According to the Newark Advocate (1/24/12), firefighters estimate the fire had burned for a good half hour before they were alerted in the wee hours of January 22. The cause of the fire was undetermined, although fire investigators suspect the blaze had its origins with an electrical malfunction in a lamp or extension cord.

The fire accident that killed eight-year-old Jashawn Parker in 2002 could have been prevented, critics say, if regulations that provide a loophole for irresponsible landlords were tightened.

Fire accidents happen for a number of reasons. However, preventable deaths or burn injury suffered by individuals, often through no fault of their own, is the driving force behind a bill championed by New York State Assemblyman Jeffrey Dinowitz (D-Riverdale) that would clamp down on landlords—called slumlords by some—who are allowed to retain troubled properties.

According to the New York Daily News (1/24/12), Parker was killed when a fire broke out at the dilapidated housing complex in which he lived in the Norwood residential neighborhood of the Bronx. Apparently alone in the apartment at the time, Parker had crawled into the bathroom, filled the tub and lay in the water in an attempt to escape the flames.

The boy died from smoke inhalation.

The building in which he died, located at 3569 DeKalb Avenue in the Bronx, was known to have electrical and wiring issues. The New York Daily News reported that two years prior to the death of the child, tenants tried to have the building turned over to a 7A administrator. The latter happens at the behest of a judge, who has the legal capacity to transfer control of a troubled property to a private administrator, who then collects rents and assures needed repairs are performed.

However, according to the report, judges will often defer a transfer in exchange for a promise by the landlord to make timely repairs.

That's what happened prior to the fire that took the life of Parker. In spite of the building having in excess of 300 housing code violations, various judges deferred to the landlord after securing promises from the building's owner that repairs would be done. The reality was that only minimal repairs were made in the two years between the original petition by tenants for a 7A Administrator and the eventual fire that took the life of Parker.

More FIRE News
It is not known if any other tenants were burned in the fire or if any pursued a burn injury lawsuit. The landlord at the center of the controversy lost control of the building three months after the fire. The proposed legislation, which has been approved several times by the House but has been perpetually stalled in the State Senate, would impose a 60-day time limit for a landlord to make required repairs before a 7A Administrator would be assigned.

At the end of the day, a fire accident can at times be just that—an accident—beyond the control of any individual. However, the most tragic fire accidents are those incurring burn injury or even death. The greatest tragedy of all is when such a fire could have been prevented and thus sparing a lifetime of heartbreak or pain on the part of those directly affected by a fire. For them, a burn injury lawsuit is needed to assert justice and seek needed compensation for pain, suffering and medical costs.

If you or a loved one have suffered losses in this case, please click the link below and your complaint will be sent to a personal injury lawyer who may evaluate your Fire claim at no cost or obligation.
Request Legal Help Now