More lawsuits have been filed in the fatal fire accident that took the lives of four children. The fire, which happened in February, occurred at day care owner Jessica Tata's home while she was allegedly out. Families were devastated by the fire, and some children who survived suffered from permanent burn injuries. 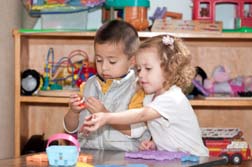 In April, Tata pleaded not guilty to all charges against her. She is accused in the deaths of four children and injuries of three others. Tata, only 22 years old, allegedly left the day care with no adult in charge, while a pot of oil burned on the stove. Seven children were reportedly left alone with no adult supervision, while Tata was out shopping. Witnesses reported seeing Tata drive up to the day care and groceries on the front lawn while Tata was yelling for help after discovering the fire.

In addition to manslaughter charges, Tata faces charges of reckless injury, abandoning a child under 15 and unlawful flight to avoid prosecution. After the fire, Tata fled to Nigeria, but was later arrested.

Meanwhile, the families of the children who died were left grief-stricken by the tragedy. Among the dead were an 18-month-old, 19-month-old, 20-month-old and a three-year-old.

More FIRE News
One family, who had two children at the day care, has filed a lawsuit against Tata, Tata's parents and the state. The lawsuit, filed by Tiffany Dickerson, alleges the state was negligent in not following its minimum standards for in-home day cares. According to the lawsuit, as reported by ABC News (03/23/11), if those standards had been filed, the business license would not have been given to Tata's child care business. Dickerson's son was killed in the fire and her daughter, two-year-old Makayla, was severely burned. Makayla likely faces future surgeries and rehabilitation in her recovery from her injuries.

Another mother, April Jackson, is reportedly also suing Tata for neglect. Jackson's son suffered burns in the fire and has permanent scarring. The suit also names Tata's parents and brothers, alleging they helped Tata set up the day care and operate it even though she was not fit to operate the day care.

If you or a loved one have suffered losses in this case, please click the link below and your complaint will be sent to a personal injury lawyer who may evaluate your Fire claim at no cost or obligation.
Request Legal Help Now