Sperm Donor Child Support: Your Genes, AND Your Wallet Please…

A landmark ruling in a New Mexico court turns up the heat on an issue that's been simmering for the better part of a decade: what are, if any, the financial obligations of a sperm donor?

Should there be at all? That's one of many questions a judge's ruling has raised—not the least of which is, what does it mean to be a father? And ultimately, will this ruling translate to busier courts as other mothers raising a child that is the product of donated sperm, rush to acquire financial support from a donor who has even a passing interest in the child? 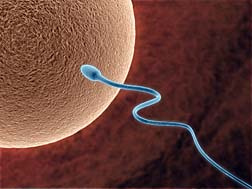 That seems to be the crux of the matter: anonymity, vs. awareness, and interest.

The Albuquerque case centers around Kevin Zoernig, and Janna Mintz, who have two children together but are not a couple. Mintz is a lesbian, and had sought the sperm of Zoernig with the view that his offspring would inherit certain qualities of Zoernig that she admired—not the least of which, his artistic ability.

Thus, from the beginning it was anything but an anonymous transaction. Even so, there was no formal agreement beyond the simple donation of sperm.

As time went on, Zoernig's interest in Mintz' children, a boy and a girl, grew. He began caring for them a couple of mornings a week while their mother worked part time. As they grew older, "he wanted greater structure for visitation, and authority," Mintz says.

But—"he wasn't interested in the accompanying responsibility to provide financial support for the kids."

He does now. A new agreement sanctioned by the courts requires Mintz to pay $250 per month in child support.

"My children think of Kevin as their father," Mintz told ABC News. "They call him 'Dad'" Thus, the boundaries of a simple business transaction, if you will, have long since been overstepped. Even though Zoernig donated the sperm to Mintz, someone with whom he has an emotional relationship but not a physical one, his subsequent and consistent interest in the children required, according to Mintz, a more traditional agreement along the lines of an equally traditional relationship and, shall we say, impregnation.

Both sides won a victory in the dispute. Mintz saw her point vindicated by the New Mexico Court of Appeals, which determined that unlike anonymous sperm donors, Zoernig does bear some financial responsibility.

The victory for Zoernig was the amount. The Court concluded that $250 per month was sufficient.

At the end of the day, however, this ruling opens the door for arguing the definition of 'anonymous.' It would be safe to assume that if a sperm donor had no absolute, or even a passing knowledge of the recipient of his sperm, nor did he possess, acquire or seek any knowledge about the offspring from that sperm, he would be presumed legally immune from any petition for child support.

However, if he knew the mother…if he knew about the offspring…if he had met them, held them, knew their names…does such knowledge, regardless of involvement, constitute the legal grounds for a child support petition? Thus, how anonymity is defined, and how 'involvement' is defined may determine the outcome of future cases.

There have been other cases. And this particular case of Mintz vs. Zoernig has been dragging through the courts for eight years. It finally reached a conclusion with a judge's verdict in early August.

"It's technically not supposed to be true," Zoernig told KOAT TV in Albuquerque, "but basically if you want to see your kids, you better pay."

More SPERM DONOR CHILD SUPPORT News
Involvement could be claimed based on the simple attempt to ascertain the identity of a donor for reasons of medical history and genetic background. The latter would make sense if you were a prospective mother wanting to ensure that your child is not beset with unforeseen medical issues. It is for this reason that the identity of the donor, for medical reasons, is sought.

Legal, and medical experts have weighed in as the result of the case. Many are predicting that interest in sperm donation will drop with this, and similar rulings. And with the prospect that a judge could overturn an existing agreement absolving the sperm donor of any and all responsibility could have donors running for the hills, leaving their sperm cups behind in the gutter.

That said, existing donors with children out there—regardless of involvement or knowledge of their offspring—would be constantly looking over their shoulders for the other baby shoe to drop.

If you have suffered losses in this case, please send your complaint to a lawyer who will review your possible [Sperm Donor Child Support Lawsuit] at no cost or obligation.
Request Legal Help Now