A recent ruling in Middletown may go a long way towards lowering the rates of throat cancer in children as the Ohio 12th District Court of Appeals has upheld a previous decision to forbid smoking around a child - a ruling that could greatly shape future child custody laws. 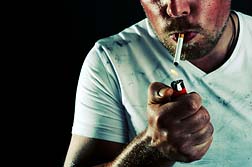 In April of 2008, the great-grandparents and legal guardians of 9-year-old Victoria Anderson brought suit against her mother for endangering the young girl with secondhand smoke during her scheduled visitation times.

More FAMILY LAW News
After an 8-month trial, it was decided that second-hand smoke presented a realistic danger to the girl, and a ban was instilled against smoking near her.

The ruling was reached through what the court refers to as "judicial notice" in which, though the girl shows no particular signs of second-hand smoke related illness, the decision was based on compelling scientific evidence of the risks that smoking can present to children.

Similar cases have been popping up around the country, with family lawyers typically earning decisions based on the best interests of the child rather than a parent's individual right to smoke.

"If you don't have to prove that smoking is harmful to your child specifically...then that could become kind of a general order in almost any case," claims law Professor Mariana Brown Bettman in an interview with Cincinnati.com.

If you or a loved one have suffered losses in this case, please click the link below and your complaint will be sent to a family law lawyer who may evaluate your Family Law claim at no cost or obligation.
Request Legal Help Now

Click to learn more about LawyersandSettlements.com
LawyersandSettlements.com - A trusted, independent legal news provider bringing quality news and information on legal cases and lawsuits filed in the United States of America to its readers since 2002. Over 650,000 legal help requests including Family Law Cases have been forwarded to lawyers all across to the country.