Deadbeat parents owe millions in support payments to children in West Virginia, and attorney Charles "Rusty" Webb is doing his level best to make sure they pay up. He recently filed a legal malpractice class action lawsuit against the State Bureau of Child Support Enforcement, alleging that it is negligent in its duty to aggressively pursue parents who ignore court orders to make child support payments. 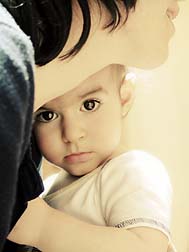 "I think we have class action here," Webb said to a woman sitting in his office several months ago as she told him how the Child Advocacy Office handled her case. Her husband owed more than $16,000 in support payments, but the statute of limitations had kicked in and the order lapsed with no action from the office that is supposed to collect from delinquent obligators.

Webb has been a family law lawyer for 23 and served two terms in the state legislature. He knew that his client, Kimberley Hoover, wasn't the only mother in West Virginia with a child support problem.

"The Child Advocate Office has a duty to collect child support payments for children. It should have been on high alert not to allow statutes of limitations to run out on these judgments," says Webb with a slightly perceptible growl. "But they weren't. No one seems to notice or care that children were losing thousands of dollars because of a failure to draft and implement a very simple writ of execution."

Webb anticipates that the Child Advocacy Board will claim to be "overworked and underpaid" and will say that "the child support payments were uncollectable" in many cases. He doesn't think that will pass as a defense. It is a particularly weak argument in the case of Kimberley Hoover. "The parent who owed the money advised the court that he was receiving a lump sum payment for a disability claim," says Webb. "This was a collectable judgment."

More FAMILY LAW News
The suit claims the Child Advocacy Bureau is in breach of statutory duty, legal malpractice, professional negligence and more. It requests that the Bureau of Child Support Enforcement and Policy Studies Inc., a private company contracted to assist the Bureau, be required to pay all outstanding uncollected orders owed to children in West Virginia, plus interest and punitive damages.

The Bureau has responded to the suit, says Webb. "Their insurance company sent a two-paragraph letter saying the Bureau isn't liable in this case."

West Virginia has one of the highest child poverty rates in the US, and parents who fail to pay child support don't help the situation. "It could be in the millions of dollars," says Webb. "And, yes, I think it is tragic."

Posted by
Justin Ross
on October 3, 2015
There should be an attorney who judge the cases of child support offenders.
Normally family lawyers are not so good these days.