The law works in mysterious ways sometimes, as does family law. A recent spousal support claim tested the child custody laws and law in general in a way that might leave one at a loss to understand the outcome. Either way it makes for interesting reading. 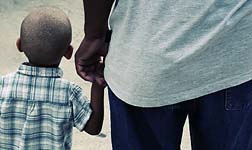 The October 5th issue of Virginia Lawyers Weekly tells the tale of one James Phifer, who was identified by Pamela Score of Washington State as the father of Jacob Score, the son born to Pamela on November 3rd, 1993. According to the account, the state provided public assistance to Score for a three-year period spanning 1993 to 1996, before seeking reimbursement from the man named by Score as the father of the child.

Phifer initially co-operated with the Washington Department of Child Support, only to deny parentage of the boy after the King County Prosecuting Attorney's Office served Phifer at his home address. At the time, Phifer also requested genetic testing and asked that any future notifications be sent to an address in Huntington, New York.

However, they all came back 'return to sender,' along with an indication that no such street even existed in the Huntington, New York delivery area. In the meantime a hearing in June 1997 (which Phifer did not attend) saw the Washington court enter a default judgment establishing parentage and other relief. Phifer's correct Washington address was secured by the US Postal Service and her was notified of the default judgment against him.

The defendant responded that he had not received any correspondence sent to him at the New York address.

More FAMILY LAW News
The case took a new turn when Phifer moved to Fairfax, at which time the Virginia Department of Child Support Enforcement attempted to have the Washington court default judgment duly registered. However a Fairfax Juvenile and Domestic Relations Court said it could not determine if Phifer had been afforded due process and thus, the Washington order may not be valid.

The default judgment against Phifer was put through anyway, including attorney's fees and more the $26,000 in back child support.

Phifer argued on appeal that the Washington judgment was void because the King County prosecutor violated his due process rights under the Full Faith and Credit for Child Support Orders and Act, when it kept mailing notices to an address it knew was invalid.

The Court of Appeals agreed. Phifer is off the hook.

If you have suffered losses in this case, please send your complaint to a lawyer who will review your possible [Family Law Lawsuit] at no cost or obligation.
Request Legal Help Now