It's bad enough when a DUI occurs, but it's worse when a cop is caught driving under the influence. Even worse—when it happens twice. 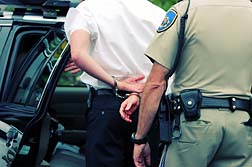 Such is the case with a 55-year-old RCMP officer from Vancouver, BC, who was recently stopped for impaired driving for the second time in two months, according to the November 10 edition of the Vancouver Sun. The 16-year veteran of the RCMP cannot be identified due to provisions of the federal Privacy Act.

It was on November 7 that Vancouver police officers noted a man urinating in a parking lot near the University of BC. When the man proceeded to get into his car, the officers stopped him and conducted an impaired driving investigation. A roadside screening and a collection of breath samples revealed that he was above the legal limit of 0.08.

The same RCMP officer was previously arrested on October 3 by Vancouver police for impaired driving and was prohibited from driving for 90 days.

More DUI/DWI News
In both cases, the man was off-duty and driving his own car. The officer has been on medical leave from his job as a general duty officer with the protective policing section at RCMP headquarters in Vancouver. The suspect faces two formal internal code of conduct disciplinary hearings. According to the RCMP, he could face loss of pay and outright dismissal from the force.

"Impaired driving is the number one criminal cause of death in Canada," said Sgt. Tim Shields, media relations officer for the RCMP in B.C., in a news release. "As police officers, we have seen first-hand the carnage and death caused by this irresponsible behavior. This makes it all the more difficult when an incident involves one of our own."

Charges have not yet been laid against the suspect, but the Vancouver police are recommending charges of impaired driving, driving over 0.08, and prohibited driving.

If you have suffered losses in this case, please send your complaint to a lawyer who will review your possible [DUI/DWI Lawsuit] at no cost or obligation.
Request Legal Help Now