Construction Accident Injures One, Kills Another in Kansas City

A dramatic construction accident left one man dead and another seriously injured when a portable boom lift with a basket on top fell over during the construction of a new performing arts center. 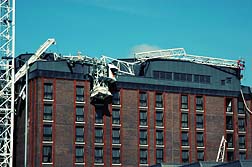 The Associated Press claims that the two men were installing steel panels on the building from the basket when the massive crane toppled over a platform of steel beams, dropping them from a height of 50 feet to the pavement.


The men were taken to local hospital, where one was pronounced dead on arrival. The other is reportedly recovering and is listed in stable condition according to the wire service.

"We have an onsite safety team down there and are working with investigators, both local and any federal agencies, to determine what caused this accident," JE Dunn president Dan Euston tells the Associated Press. "We're very deeply saddened by this event. Our heartfelt thoughts and prayers are with the families."

One in five workplace accidents occurs to construction workers, according to the U.S. Occupational Health and Safety Administration. The same study also claims that crane accidents are responsible for upwards of 82 workplace fatalities every year in this country.

If you or a loved one have suffered losses in this case, please click the link below and your complaint will be sent to an accidents lawyer who may evaluate your Construction Accident claim at no cost or obligation.
Request Legal Help Now