A 51-year-old man was killed over the weekend in a construction accident after a dump truck reportedly backed over him. 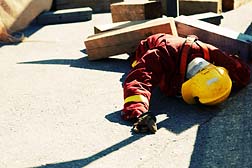 John Thomas Sparks, who was from Salem, Oregon, was reportedly working as a flagger at the intersection of SW 173rd and SW Walker Road when a dump truck backed over him, NWCN.com reports.

Beaverton Police Detective Sergeant Jim Shumway said the construction worker was helping a driver turn onto a street when he was hit by the dump truck. After an investigation, it has been suggested that Sparks may have been standing between the truck's rearview mirrors at the time of the incident and was knocked to the ground.

Because he was unable to get out of the way of the vehicle, he was run over. Sparks was reportedly declared dead at the scene.

According to the Oregon Occupational Safety and Health Administration, this is "at least" the 15th construction accident fatality in Oregon since October 2008.

The Washington County Crash Analysis Reconstruction Team are assisting the Beaverton Police with the ongoing investigation.

If you or a loved one have suffered losses in this case, please click the link below and your complaint will be sent to a personal injury lawyer who may evaluate your Construction Accident claim at no cost or obligation.
Request Legal Help Now