A construction accident recently claimed the life of a construction worker in Iowa. In a separate incident, two others were seriously injured when scaffolding collapsed at a construction site in Massachusetts. The unfortunate mishaps illustrate how dangerous construction work can be and how important it is to follow safety protocol onsite. 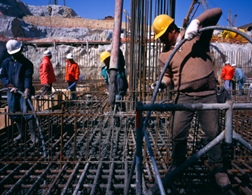 Accidents increase when those responsible for construction sites decide to cut corners in an effort to speed the job and reduce costs. There is no indication in any of these forgoing incidents, so far, of any lapses in safety protocols.

The Associated Press (AP) reported earlier this month that Larry Reisner, 51 of Oelwein, Iowa, died after being struck in the head by a brace supporting a concrete cast at the new Waverly-Shell Rock Middle School, which was under construction at the time. He reportedly succumbed to his injuries at University Hospitals in Iowa City on July 3.

Meanwhile, in an unrelated construction accident, two workers were rushed to hospital with "significant injuries" after the scaffolding on which they were working collapsed in Groton, Massachusetts. The Lowell Sun did not reveal the specific worksite or the names of the two injured construction workers.

The Chief of Police for the local force told the press that the construction accident happened sometime between 8 am and 8:30 am on July 8 toward the beginning of the work day. The injured workers were rushed to Nashoba Valley Medical Center and then transported to UMass Memorial Medical Center in Worcester with injuries that Police Chief Donald Palma called "significant."

If you have suffered losses in this case, please send your complaint to a lawyer who will review your possible [Construction Accident Lawsuit] at no cost or obligation.
Request Legal Help Now

Posted by
Tammie Delgado OSHA 10
on July 10, 2015
I got fired yesterday from a day labor ticket here in Austin Texas..yes I am a labor worker at 8.00 an hr..the site is not only in safe it is not OSHA regulated at all..Journeyman construction on red river an 9 the street..I hope that's right..yesterday one of my bosses requesteted us to walk under a free hanging scaffold hanging from the roof. ..it was at least 6 ft off the groung..wind was blowing an I said no..now he called my labor office an fired me because I refused to put my life on the line to pick up trash under this..OSHA seriously needs to visit this site..it is dangerious....now I'm out of a job an I was suppose to start work as an electition in 1 week full time there..I don't know or really want to now that journey man treats trades this way..there are seriously dangerous issues at this site..please contact me....