Construction Site Accidents Can be Life Changing or Deadly 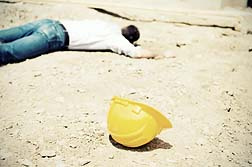 Here are examples of three construction site accidents that happened in three states within three days of one another.

On August 12th a construction worker toiling at the Nebraska Medical center in Central Omaha fell from a scissor lift and plummeted 40 feet to the ground below. The Omaha World-Herald reported that the 46-year old employee of Moen Steel Erection, who asked that he not be identified, was unconscious after the morning fall.

However according to a spokesperson for Kiewit Corporation, the general contractor on the $31 million project, the victim had regained consciousness and was talking later in the morning.

He suffered a broken leg in the fall.

The next day, on the campus of Texas A&M University-Commerce a construction worker fell from scaffolding at a work site involving the new Music Hall. The worker fell between 30 and 40 feet (Greenville Herald-Banner, August 13th 2009) and was unconscious when he hit the ground.

The worker, who was not identified, was airlifted to Parkland Memorial Hospital in Dallas and the accident was under investigation by the federal Occupational Safety and Health Administration.

Finally, while most were enjoying their Saturday this past weekend a construction worker lost his life after falling about 42 feet from the roof of a construction site in Washington County.

All three construction site accidents occurred in the morning.

With a fall, survivability depends how you land. In 2005 a construction worker in New Jersey fell 14 feet—much less than the three workers noted above. However Jose Alves landed on his head, fracturing his C3 vertebrae and leaving him a quadriplegic.

He sued a series of eight defendants and won an award totaling $13.275 million. The construction worker, then 33, had been working with a few other men at the top of a wall attempting to install a problematic roof truss. Attached to a crane, the truss unexpectedly snapped, throwing Alves to the ground.

The award for the construction site accident was announced one year ago today.

If you have suffered losses in this case, please send your complaint to a lawyer who will review your possible [Construction Accident Lawsuit] at no cost or obligation.
Request Legal Help Now