MRI Health Risks: "I need to get tested for NSF/NFD"

Luke had surgery right after an MRI determined that his gallbladder was making him so sick. But instead of getting better, Luke's health spiraled downhill, fast. Nobody told him of potential MRI health risks after being injected with a gadolinium-based contrast agent, which improves the visibility of internal structures during an MRI. 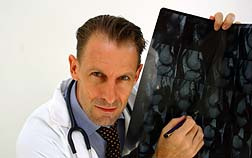 Luke is a 24-year military veteran. A few months after his gallbladder surgery, his knees started to ache but he thought it was arthritis setting in. "My body took a beating after so many years in the military," he says. Luke had another MRI, again with the contrast agent. Turns out that a cyst had to be removed so he was back in the hospital again. "Immediately after surgery, I knew something was wrong," Luke says. "I had a burning rash on my knee and my nerves were twitching along with muscle cramping." Luke adds that the pain didn't subside and the rash has now radiated up and down his leg.

"After that I developed respiratory problems; I couldn't believe what was going on," says Luke. "Whatever had infected me seemed to be traveling all over my body. I thought I had a massive infection and now I have a litany of symptoms, including a sore back and ribs, and nausea. And I have lost 40 pounds since surgery.

And I've missed three months of work. Ironically I work in the Texas Department of Aging and Disability services. I didn't realize that the injection I was given with that contrast agent during the MRIs could cause all these symptoms until I went on the internet—that was two days ago.

I didn't know that such a condition existed and I can't help but think I might be developing NSF/NFD. Because I'm a vet, I have to see a VA doctor and I'm not too happy about that—they probably haven't heard of this disease either. All I can do is impress upon them that I need to get tested or see the right specialist. And if I am diagnosed with NSF, I'd better get a lawyer."

More MRI HEALTH RISKS News
So far, Nephrogenic Systemic Fibrosis (NSF), also known as nephrogenic fibrosing dermopathy (NFD), has occurred only in people with kidney disease. But this man-made disease is relatively new and not enough is known about it. What is known, however, is that reports have identified a possible link between NSF/NFD and exposure to gadolinium containing contrast agents used at high doses for Magnetic Resonance Angiography (MRA) or Magnetic Resonance Imaging (MRI). On its website, the FDA states that "Patients with NSF/NFD have tight and rigid skin making it difficult to bend joints. NSF/NFD may also result in fibrosis, or scarring, of body organs resulting in the inability of body organs to work properly and can lead to death. Diagnosis of NSF/NFD is done by looking at a sample of skin under a microscope."