“My Lawyer Says I Have a Good Claim against Zimmer NexGen”

“I wish I knew about Zimmer NexGen defects before my knee replacement surgery,” says Mike. “Why didn’t my surgeon know? After my Zimmer knee failed I read online about so many Zimmer knee failures and lawsuits; I was amazed.” 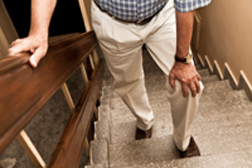 Mike is frustrated, to say the least, with his first orthopedic surgeon (he underwent revision surgery with another surgeon). “I really think some surgeons pick a company - in his case Zimmer - and blindly stay with them without researching the device,” Mike says. “I know that many doctors are swayed by sales reps.

“After I had the surgery I was in a lot of pain and never saw a knee swell so much. I wasn’t told this would happen. Then I started hearing popping and clicking sounds...I saw the surgeon two weeks after my knee replacement (you typically have a follow-up after six weeks) and he just said it was ‘standard procedure,’ and not to worry about it."

But is it normal for your knee to swell to the size of a basketball, always scorching hot and hearing popping and clicking sounds? Mike voiced his same concerns two months later. This time his surgeon took x-rays and again said everything was OK. He told Mike it would take anywhere from six months to a year before his knee would feel ‘normal.’ Mike had his NexGen knee surgery in November 2012, and the last time he saw this surgeon was April 2013.

“In October 2013, I had my annual physical and my GP said I should see another surgeon. Lo and behold this new surgeon said my knee wasn’t right,” says Mike. “He took x-rays and compared them to those taken last year. These new x-rays showed the top part of the replacement had separated from the bone and there was a profound difference from the earlier x-rays.

“From the first day after surgery this knee had never gotten better. I met people much older than me who had replacements and they were running, playing tennis, golfing, living a great life. Was it just the luck of the draw? I think I got a double whammy: an incompetent surgeon and a defective knee.”

Mike’s new surgeon told him his knee needed to be drained and that would decrease the swelling. He explained to Mike that the fluid is like a cyst in a soft sack but over time it gets hard and could get infected. This was not how his knee should look a year after surgery. And it was still hot. The surgeon also ordered a bone scan to rule out infection.

“The bone scan showed my knee lit up like a Christmas tree,” Mike says. “I had a serious infection and now the bottom part of the NexGen had pulled away. My surgeon at first thought I needed just a partial revision but now I needed a total revision using a DePuy system. It would take twice as long, with a recovery twice as long, a greater risk of infection, possible blood clot and possible death. He told me that every time you go in and operate that portion of the body it weakens. As well, a normal knee replacement has four parts but I now have 12 parts.

My knee was getting worse so they got me in sooner than later: I had the revision surgery December 17. The swelling is finally going down. I am able to walk with a cane, I can finally go up and down stairs and my knee feels warm, not hot. I haven’t taken pain killers in 10 days. And they will release me from physical therapy next week. This second knee surgery was the polar opposite of my first.

More Zimmer NexGen News
My lawyer has already filed several cases similar to mine. He told me to get the sticker sheet from the hospital where I had the first surgery that shows the lot and model number of the Zimmer NexGen. And every part has a bar code entered on this sheet so they know how much to charge you for. They even scan the type of cement used.

My lawyer also got my bone tissue, regular tissue and the knee implant itself; they had it picked up after it was sterilized at the hospital. They have an expert orthopedic surgeon who is going to review my implant. Meanwhile I am on the mend and I am hopeful this new device will work. I believe the NexGen was a good idea gone wrong and my lawyer thinks I have a pretty solid claim against Zimmer. He also told me that Zimmer is fighting this tooth and nail.

They have been doing depositions and discovery for the past few years and a number bellwether trials. The first MDL cases are scheduled for trial in June 2014. But as they say, it ain’t over ’til it’s over.”

Posted by
Leonard
on September 30, 2014
Hay mike hope is going will now. I have my ZIMMER NEX-GEN system put in on 06/09/2008. I was have the same kind of things going on in my knee from day one. I got telling my DR thing where not right. But that when on for a year. Then he send me to get a scan and it showed the bone has came from the metal. He said I needed a Revision to get the repairs made. Will I went to see a other DR. hE LOOKED AT THE SAME SCAN AND SAID you do need the revision for repairs. That was on 7/10/09. I did not know of the recall then because it did not come out to 2010. Will it has been 5 years and just about a year ago it started all over again. Having the very pain, the joint is very loose. I have to see the same Dr. that did the last Revision on 10/10/2014, I know what is going to happen now a other revision. But this time I hope they take it out. thanks leonard
Posted by
Pam Shumate
on February 10, 2014
Reading your story Mike is like living my life every day.I'm having surgery in 3 days to get this mess out of my leg and only hope I can function once a new different kind is put in.Now I just need a good lawyer !