Rollover in a Yamaha Rhino

"Joseph Moore's son made a turn in a Yamaha Rhino and the ATV rolled over, badly injuring his leg. "Ironically, Yamaha sent a letter two days before this accident, offering to put doors on the vehicle at no charge because people had been injured," says Moore. "If doors were on this Rhino, my son would have likely rolled the vehicle over and walked away without injury."

After the accident, Moore's stepfather (owner of the Rhino) went back to Yamaha with the letter, and asked for doors to be placed on his Rhino. They said that, due to supply and demand, doors were "unavailable at this time." 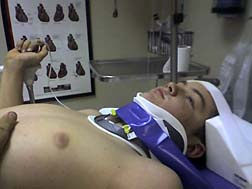 It was Labor day weekend and the Moores' visited relatives in the country, where they took turns on the Rhino. "Everybody was winding down for the day and I was taking a shower while my 17-year-old son, Joseph Junior, went out for one last spin on the Rhino," says Moore. "He was about half a mile from the house, next to a country road. Apparently he made a slow turn and the vehicle started to roll over. Joseph had been riding on a dirt bike all day and instinctively put his left leg out to try and stop it from rolling over.

"Needless to say it rolled and his leg was pinned under the roll bar at the floor board. He had difficulty getting his seatbelt off and then he realized he was out there alone. He tried lifting the ATV but that didn't work. Joseph was on his back in the dirt and he started to pray. A few cars drove by and nobody stopped—he was just off the road so it wasn't easy to spot him. Finally, a car saw him as they drove by, stopped and backed up.

They called us on their cell phone and by the time we got up there, the driver of the car had lifted the Rhino off Joseph. Just before the call, we were talking about checking on him because dinner was on the table.

By the time we got there, the driver had already called 911. The volunteer fire department came out and they wanted to transport him to hospital by helicopter because that was regular procedure in ATV accidents. However, once the paramedics arrived, they realized it wasn't necessary. He had a good pulse in his foot so he went to hospital by ambulance.

At the hospital he was placed on morphine and had x-rays. Thank God there were no serious injuries and no broken bones but he did have a major contusion of his ankle. Joseph was placed in a walking cast and suffered nerve damage. He wore the cast for a week and was referred to an orthopedic doctor who put him in another cast for three more weeks.

He still has a loss of feeling in his toes and parts of his foot. But they say those nerves ought to regenerate themselves. 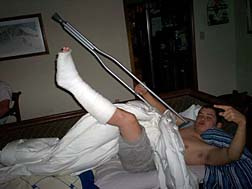 Joseph's ER doctor was thinking about getting a Rhino but he has seen too many injuries with them. Curiosity made me go online—I wanted to know if anyone else had this problem, especially with the combination of my stepfather's letter and the ER doctor's warning.

More News
I was surprised to read of so many complaints and serious injuries. You would think if someone manufactures something, the engineers would take safety into account before it is mass-produced and placed in the market. I never thought about it but that isn't my job—it is theirs. Now this accident has occurred to a loved one, it just seems like common sense that Yamaha engineers would think about safety features such as doors.

This is what I want to see from a lawsuit: first and foremost, make these doors available to every Rhino owner immediately. Secondly, Yamaha should pay all medical expenses I have incurred. My wife got a bill today from the hospital for $2,000--I have to make co-payments. I'm not looking to gain financially from this—I just want Yamaha to do what is right."