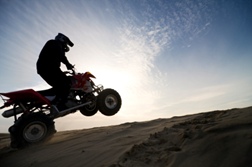 Twenty-year-old Chad Everett Moore and his 19-year-old cousin Steve Smith Jarvis III were out riding their ATVs on the dirt roads outside Pine Ridge Community Church, just west of Mt Airy. During their run, both men were heading for a sharp turn around a corner when they came face to face with each other and collided head-on.\

Both men were killed instantly, according to official reports.

"It's what you would call a freak accident," Surry County Emergency Management Director John Shelton told the Mount Airy News. "Neither one of the four-wheelers knew where the other was when they were coming around a bend, and collided together. There was sort of a blind spot in a wooded area down there... looks like both of the four wheelers could not see one another."

The crash was reported by an unnamed third rider who had joined the two men for their practice run.

If you or a loved one have suffered losses in this case, please click the link below and your complaint will be sent to an accidents lawyer who may evaluate your ATV Rollover claim at no cost or obligation.
Request Legal Help Now