Beryl, UT: Beverly and Marvin Jeffrey were riding in a Yahama Rhino ATV on July 13 in West Virginia when the ATV began to roll during what was described in a lawsuit as an innocuous turn. "As plaintiff was in the process of making a low speed right hand turn, the Rhino tipped/rolled over and plaintiff Beverly Jeffrey instinctively placed her left arm out of the Rhino in an attempt to stabilize the Rhino," the Jeffreys' suit states. "As she did so, the Rhino's roll cage pinned the plaintiff's left hand/wrist causing a partial amputation to her left hand fingers at the scene while she was left trapped beneath the subject Rhino." 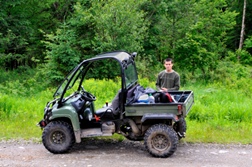 As a result of the accident, Jeffrey has endured multiple surgeries and skin grafts on her left hand, palm and stomach. The plaintiff was life-flighted to hospital following the accident and endured prolonged hospital stays as a result of her injuries.

Meanwhile, in a separate ATV accident two years earlier, Jennifer Chandler was riding with her daughter Alysia when the Yamaha Rhino ATV Jennifer was operating rolled over on July 10, 2007 in Raleigh County. Chandler has filed a lawsuit on behalf of herself and her daughter, who suffered severe injuries to her left arm when the low-speed accident occurred.

Both lawsuits, in fact, maintain that the accidents happened at low rates of speed and occurred on a level grade. According to the 4/28/10 issue of the West Virginia Record, the manufacturer knew of the vehicle's tendency to become unstable even on flat terrain, but induced buyers into purchasing what the company advertised as a safer ATV than its competitors.

"The Yamaha defendants designed and manufactured the Rhino with seatbelts, a roll cage, bucket seats and a steering wheel, which provided the public with the perception and understanding that it was safer than other all-terrain vehicles, including other side-by-side vehicles," the suit states. In fact, since the Yamaha Rhino was introduced to the United States market in 2003, it has been involved in numerous rollover accidents, the Jeffreys and Chandler lawsuits claim. "Defendants continued, for over three years to market, sell and warrant the Rhino as a safe and stable all terrain utility vehicle effectively minimizing or diluting their responsibility for tip over/rollover injuries."

More ATV ROLLOVER News
It should be noted that not all ATV accidents are caused by alleged defects in the ATV. The Spectrum of St. George, Utah reported on 4/18/10 that five children under the age of 10 were injured when the Yamaha Rhino they were driving went out of control and slammed into a tree in Utah. It is not known if the children—all girls—were wearing helmets or using seat belts, although it should be noted that there are only two seats in the Yamaha Rhino. The driver of the ATV, at nine years old, was the oldest in the group.

The owner of the Rhino was not in Beryl at the time of the accident. The mother of one of the girls was apparently supervising them. One of the children was sent to Primary Children's Hospital in Salt Lake City, in guarded condition.

"I believe there is negligence involved," said Sherriff Mark Gower.

In April a Brookville couple was injured when their ATV overturned. In a separate accident, a 12-year-old boy from Cincinatti was found dead after he took off to gather firewood while camping with his family. ATV accidents and ATV rollover usually begin occurring around this time of year.

Posted by
Dylan
on October 7, 2015
This has to be the most biased web site in the world. The ATV lost control? No. No. No. The nine year old, inexperienced one who was operating this vehicle lost control of it. There's a reason you need to be 16 to legally operate these. It's meant to seat 2, and there were 5 in it. None of them likely had seat belts or helmets on. Negligence causes death, not the machine. I suppose next you're going to try and tell me that hammers a responsible for hundreds of broken hands worldwide.

Click to learn more about LawyersandSettlements.com
LawyersandSettlements.com - A trusted, independent legal news provider bringing quality news and information on all legal cases and lawsuits filed in United States of America to its readers since 2002. Over 250,000 legal help requests including Accidents, and Automotive accidents have been forwarded to lawyers all across to the country.