"It doesn't take a rocket scientist to figure out that, if the Rhino was designed with doors, it would have kept legs from flying out on a rollover therefore saving people from disastrous injuries and perhaps their lives," says Carter Spohn, investigator and business director, Magana Cathcart and McCarthy.

Spohn discusses with LawyersandSettlements the Yamaha Rhino warnings that came out around Sept, 2007. They were sent to all Rhino owners in an attempt to amend the warnings that came with the vehicles when purchased. His perspective is that, if you heed these warnings, you might as well park your Rhino in the garage and not even use it.

Lawyers and Settlements (LAS): Why is that? 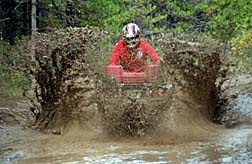 Carter Spohn (CS): Part of what Yamaha is trying to warn against is something that is human nature--to stick your arm or leg out in a rollover. I know that human factor experts in other rollover cases are prepared to testify that it would be impossible to warn against some of these human nature responses.

LAS: Why didn't the designers add doors before they left the assembly line?

CS :I don't know the answer and apparently the top people in their design and production departments don't know either. However, I have it on good authority that in previous deposition testimony, that when asked this very question, they had no answer.

CS: I have it on further authority that they knew when they designed the vehicle that it would in fact rollover, and they designed it without doors and therefore knew on rollovers that there was a propensity for lower extremities to pop out. It is also my understanding that Yamaha had dozens of complaints in a 2-3 year period from Rhino customers complaining of injuries to their lower extremities. Rhino actually acknowledged these complaints and continue to say that they didn't know anything about them.

LAS: Is there any advantage to designing an ATV without doors?

CS: It appears to be Yamaha's intent to design a vehicle that was quicker and smaller. And in doing so, the vehicle they ended up creating had a very high center of gravity, hence more rollovers. And in doing so, it appears that they didn't take into consideration any of the safety precautions that would compliment a vehicle with a high center of gravity.

LAS: Yamaha warnings: if you think the Rhino may tip over or roll...

CS: [The warning] is absurd. I know that if this thing rolls over, the first thing I am going to do is yell oh... then I am going to figure out how to stay alive, in that order.

LAS: Then the warning goes on to say "Don't put your hands or feet outside the vehicle for any reason".

CS: In a video I recently saw advertising the Rhino, the passenger was hanging onto the outside roll bar edge, causing his arm and hand to be outside the vehicle. They want to put these hand-holds inside the vehicle because they know people will hold on...

LAS: Another great warning: if you do not use care in maneuvering the Rhino, you can cause it to roll over in flat, open areas.

CS: In that case, it may be most dangerous to get it from the truck across the parking lot to the off-road area.

Here is the best one: "Yamaha's overview of occupant protection: now available at your dealership for free: the doors are designed to reduce the likelihood that you will stick your leg out to stop the vehicle from tipping over or for any other reason in a rollover."

More News
Translation: Yamaha knew the Rhino was going to roll over when they designed it. Now after hundreds of injuries and some deaths, they have figured out that the doors would help keep lower extremities inside, which they knew upon entry to the market, would occur.

If you or a loved one is injured in an accident involving a Rhino or any other ATV, you should consult an experienced attorney as soon as possible. An experienced attorney can help procure medical assistance, advise you of your rights, and file a lawsuit to hold those who caused your injuries responsible for your damages. Since the applicable statute of limitations affects how much time you have to file a lawsuit, you should not delay.