When Sue Rabe read an article about a 10-year-old boy in Wyoming whose [Yahama Rhino] rolled over on him this week while he was doing chores on the family farm, she commented, "It's typical for kids to be on these adult size things on a farm." That boy survived but Sue and Tom Rabe's son Kyle, aged 10 also, wasn't so lucky.

Their family's ATV flipped and fatally pinned him underneath on May 6, 2002.

The Rabes live in rural Oregon on 170 acres of farmland and the area kids visit each other by riding ATVs on a network of dirt and gravel road and through farmer's fields. Tom Rabe fills in the details of the accident.

"Kyle went to visit his friend Zach. They had been waiting for the grass to grow in a nearby field so they could ride through and leave 'trails'. Getting ready to come back to our house for dinner, Kyle took a little extra time getting all his riding gear on and either hit rut or a stick in his path and lost control of the ATV. It made a sharp turn to the left, throwing him down the hill and then rolled up on its side with its rear utility rack in the small of Kyle's back. Unconscious and pinned to the ground, he was unable to breathe. Zach and his Dad helped lift the ATV off of Kyle; I got to the scene about 15 minutes later and began to administer CPR. In a few horrible moments of breathing for him and tasting the cookies and milk on his breath, I came to the awful realization that I had been wrong to let him ride a full-sized ATV." 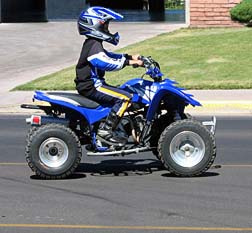 Sue Rabe, co-founder of Concerned Families for ATV Safety, advocates for parents to become more knowledgeable but puts the blame squarely on the manufacturers and the industry "The industry tells parents they should be able to judge when their child is old enough, as long as you are supervising them. Kyle had lots of responsibilities around the farm but we didn't realize a kid's brain isn't old enough physically and mentally to handle the situation. As a parent you couldn't have known that unless you're in the field. Parents aren't knowledgeable how an ATV works - even those who ride them themselves. You think as long as they're trained and they've got all the gear, they're supervised, they're good but it doesn't matter. ATVs are just too heavy and unstable for a kid to handle. You have to be smart enough to know how to react."

"They call them all-terrain but so many things will make them flip. My husband said, 'if only they'd put seatbelts and a roll bar'. Then we saw the Rhino. It looked more like a dune buggy. It looked like a safe product but then we started hearing about the deaths and realized they're not safe at all. It's deceiving. I don't care if it's a Rhino or an Arctic Cat, they're all the same. Manufacturers talk about getting 'the best fit'. Your kid may be tall and won't fit a youth ATV. If a kid's tall enough to sit in the car should they be allowed to drive? "

More News
"Through Concerned Families for ATV Safety we are fighting on a federal level to get legislation to keep under 16s off ATVs. The State is asking for our input in helping with safety rules."

"Some reporters from The Oregonian newspaper spent a full year doing a study on ATVs, using engineers they'd hired away from the manufacturer. They'd find that the Consumer Product Safety Commission looked the other way or that some of the engineers were suddenly fired. It's all very political, like the tobacco industry.
Why aren't there any public service announcements? They have them for alcohol, guns, helmets, tobacco. The Consumer Product Safety Commission works so closely with manufacturers so we don't really trust them. They should be putting out warnings like '6,000 kids have died, please think twice' and with guidelines as far as size and power.

It will just take time and a lot of press and lawsuits to make a difference."