A settlement has been reached in the wrongful death lawsuit by the father of John Derek Chamberlain, who was beaten by other prisoners while officers were nearby watching television, will receive a $600,000 settlement. Jail inmates justified the beating by stating they thought he was a child molester.

$60 million was the amount originally sought in the wrongful death lawsuit by George Chamberlain, which is much lower than the amount in which he was awarded. The lawsuit states that George's son, John, was tortured and beaten to death for a period of 20 minutes on October 5, 2006 while deputies at Theo Lacy jail were negligent due to the viewing of a baseball game. The television the deputies were watching the game on was located inside a guard receptacle not far from the area where John Chamberlain was beaten to death. 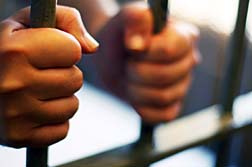 George Chamberlain's attorney accepted the $600,000 offer by the county because of concern regarding the negative view the jury would possibly have about John Chamberlain. John Chamberlain had been found in possession of child pornography but had not been accused of child molestation, as the inmates had claimed was the reason for their beating and torturing of Chamberlain. George Chamberlain's attorney made known that he knew the jury would possibly not be very excited about awarding such a large sum of money for the death of someone they may have felt could have been a child molester. The case settled for the low amount due to the fact that prejudice was inevitable by some or all of the jurors.

As for the county officials, no comments can be made until the settlement agreement is signed by George Chamberlain. On Tuesday, the Board of Supervisors approved the offer by the county.

A total of seven inmates have been charged with the murder of John Chamberlain. One of those inmates has accused two deputies, Jason Chapluk and Kevin Taylor, of being instigators in the attack by providing them with information that was inaccurate. That information stated that Chamberlain was a child molester. In response to the inmate's claim, Taylor stated that he was watching a baseball game on a television located in a guard receptacle and did not notice the commotion.

A special grand jury has now been formed due to an investigation by the Orange County Register regarding the killing. Items that are being looked at are the actions by the deputies. Also, the Board of Supervisors has created an office of independent review to take a look at complaints made inside the Orange County jail, which is one of the largest jails in the nation. These complaints have involved claims of deputies exerting excessive force and inmates being shocked by Tasers, in which there are videotapes that have recently emerged.

More News
Before Chamberlain's death, he had begged for days to be taken out of his particular jail ward because of the threats being made toward him by other inmates. His attorney had made a phone call to the jail not long before the attack that took his life, asking that an investigation be conducted concerning Chamberlains complaints.

According to an entry in the jail log by Deputy Taylor, Taylor states that Chamberlain declined to be moved when Taylor offered.

As for the attack, it was at some point after 6:30 p.m. that inmates led Chamberlain to a hidden cubicle where the attack took place. They threw scalding hot water on him, hit him with shoes, kicked his head and hit them with their fists. One inmate broke his hand from punching Chamberlain so hard and another stomped Chamberlain's skull.

It was when inmates noticed that Chamberlain was unconscious that they distracted the deputies from the baseball game and told them that the situation had gotten out of hand.

If a loved one has suffered a wrongful death, please contact a lawyer involved in a possible [Wrongful Death Lawsuit] to review your case at no cost or obligation.
Request Legal Help Now