The co-founder of the Golden Gate Real Estate Investment Trust, who had been on the run after being convicted of fraud by a Dallas, Texas jury in April, was recently arrested by authorities in Fort Lauderdale, Florida, according to Courthouse News Service. 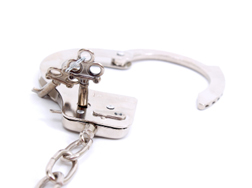 Michael Rouse, a 56-year-old resident of Wellington, Florida, was convicted by the jury on nine counts of felony indictment related to his operation of the Golden Gate REIT, the news source reported.

Rouse and his alleged co-conspirator James Testa founded and were trustees of Golden Gate REIT. They allegedly raised more than $2 million from investors in 2003 to 2004 based on claims that their investment was safe and would produce significant gains.

Though they claimed that the REIT was a safe place for investors to put their money, prosecutors claimed none of the capital was invested in anything connected with real estate.

According to the news source, the two individuals placed the money into funds that bet on foreign currencies, and these investments failed.

"The investors lost most or all of their money, while Testa and Rouse paid themselves handsome salaries and spent the investors' funds on business and personal expenses, including Mercedes Benz automobiles that cost more than $125,000 each," prosecutors said in a statement.

More WILLIAM TATRO News
The case is similar to that of William L. Tatro, the former president of Eagle Steward. According to a number of complaints, Tatro repeatedly sold Real Estate Investment Trusts (REITs), as well as variable annuities and leveraged inverse ETFs (Exchange Traded Funds) to clients for whom the investments were entirely unsuitable.

Several individuals filed claims against the financial adviser due to alleged mismanagement of their accounts, according to a previous article in the Rochester Democrat and Chronicle.

Although the initial lawsuit was dropped, several other claims against Tatro arose, and the individuals alleged that he "subjected the plaintiffs to heavy losses in the stock market by exposing their assets to inappropriate risks and misrepresented his qualifications," the news source reported.

He went on to defend himself against the claims, calling the plaintiffs "disgruntled clients," and won a dismissal of the case. Tatro has faced at least 50 complaints from his customers, according to the news source.

If you or a loved one have suffered losses in this case, please click the link below and your complaint will be sent to a consumer frauds lawyer who may evaluate your William Tatro claim at no cost or obligation.
Request Legal Help Now