The massive wildfire this past May, known popularly as the “Powerhouse Fire,” left more than 30,000 acres of burned forestation in its wake and claimed 24 homes, including 29 other outlying structures. While the cause of the blaze continues to be under investigation, the fact that the fire broke out near a power station has affected homeowners watching and waiting, in the event the cause could lead to a wildfire lawsuit. 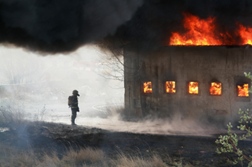 Would-be plaintiffs are no doubt eyeing the forest fire lawsuit filed against Rocky Mountain Power last fall on behalf of more than 100 property owners who claimed damages to their homes and businesses. According to the Ventura County Star (9/11/12), the cause of the wildfire was determined to be arcing between transmission power lines that were deemed too close together.

Will a similar cause be linked to the Powerhouse fire?

In reporting on another massive wildfire this summer, dubbed the Mountain fire, the Los Angeles Times (7/26/13) noted that officials determined the fire was caused by electrical equipment failure on private property, and was not linked to a utility. Property owners who lost their homes, possessions and in some cases decades of precious memories will be waiting for the cause of the Powerhouse fire to be determined, with an eye to the pursuit of a wildfire claim.

The fire, which broke out May 30 and raged for 11 days, started near a power station in the Santa Clarita region.

In the meantime, the Los Angeles Times (6/25/13) reported on the opening of a disaster loan outreach center under the auspices of the US Small Business Administration to facilitate the availability of low-interest federal disaster loans for homeowners, renters, business owners and those who operate nonprofits.

That’s little solace for homeowners whose homes were leveled by the wildfire and suffered total forest fire loss. Various residents affected by the massive wildfire, in comments to the Los Angeles Times, lamented the loss of not only their homes and possessions but 40 years or more of irreplaceable mementos. One man lost his fully restored 1952 Willys Jeep in the blaze.

More WILDFIRE LOSS News
Any potential wildfire loss claim, pending a conclusive cause, could also speak to criticism over current firefighting techniques, which require a wildfire to be extinguished as soon as possible to prevent damage to home and property. However, in so doing, there remains pockets of brush that are tinder-dry and more susceptible to wildfires, according to the Los Angeles Times report. Fanned by high winds, the ultra-dry brush literally explodes at the invitation of a spark. Allowing a wildfire to burn and claim the bulk of ultra-dry brush in the short term could result in less daunting and perhaps less frequent wildfires in the future.

For now, while affected residents sift through what remains of their lives and investigate rebuilding (those with the foresight to carry fire insurance), all eyes are on the work of officials tasked with determining a cause. Depending upon the outcome and conclusion of any investigation, residents may well be in the queue for a wildfire loss claim.

If you or a loved one have suffered losses in this case, please click the link below and your complaint will be sent to a personal injury lawyer who may evaluate your Wildfire Loss claim at no cost or obligation.
Request Legal Help Now