A wildfire could be coming to a neighborhood near you. Better get ready. 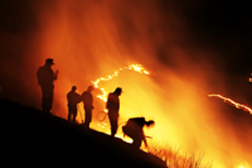 Last month, The National Interagency Fire Center, headquartered in Boise, Idaho, put the nation on high alert for the fifth time in 10 years. A Preparedness Level 5, or PL-5, means that there are so many fires burning in so many regions of the country that firefighting agencies are virtually maxed out and on the brink of being overwhelmed.

Now with the end of the summer fire season in sight, conditions have improved to a PL-2, according to the Fire Center, but it is still a risk in several parts of the country and it will remain that way for at least two more months; particularly in California’s northern and southwestern mountain regions, where the Santa Ana winds can whip up a devastating fire storm - like the kind that took nine lives, burned 500,000 acres, destroyed 1,500 homes across Southern California in the summer of 2007.

“Make sure you are insured for 100 percent of the value of your property,” says San Diego attorney James Frantz. “And take photos, videotape your house, your valuables, your car and everything else. It’s hard to prove a negative and the receipts will likely be ashes.”

Frantz represents some 300 home and business owners whose property was destroyed by two wildfires blamed on badly maintained power lines belonging to San Diego Gas & Electric (SDG&E) in the summer of 2007. The fires triggered the largest mass torts cases in the history of California and involved an estimated $3 billion in damages.

“We still have about 300 cases pending, but we expect that they will be settled either in negotiations, on appeal or in ‘damages only trials’ within the next six to 12 months,” he says.

Insurance usually covers fire, but in many cases, the insurance money is not enough to actually recoup all the losses. If there is a specific entity, in this case, SDG&E, that is responsible for the fire, you might have to turn to the courts to get compensation.

“We all know the insurance claims don’t usually satisfy all the damages because many properties are under-insured. We then have to bring a claim for the deficit against whoever is responsible for the fire,” says Frantz.

More WILDFIRE LOSS News
“It’s important to get the right lawyer,” says Brian Heffernan, an attorney with ELL Law in Los Angeles. “And, it is important to find out the cause of the fire. I find that people are usually very interested in that and they know the cause by the time they come to see me.”

Other tips for fire damage claims:

1.) Make your claim with the insurance company immediately
2.) If your home is destroyed, you may be eligible for alternative housing costs immediately
3.) Keep detailed notes about conversations with the insurance company
4.) Take pictures of your fire-damaged property
5.) Prevent further damage by covering the area with tarps
6.) Even if you have pictures of all your possessions, start writing down everything you lost in the fire - everything!

If you or a loved one have suffered losses in this case, please click the link below and your complaint will be sent to a personal injury lawyer who may evaluate your Wildfire Loss claim at no cost or obligation.
Request Legal Help Now