A former employee of the Kennewick Irrigation District (KID) in Washington State whose wrongful termination lawsuit was lost in a summary judgment granted to the defense has been advised by her Washington Employment lawyers to appeal. 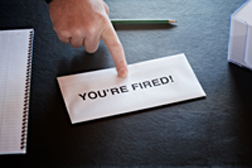 According to the Tri-City Herald (8/6/13), Joetta Rupert had been earning about $80,000 per year as the manager of the KID realty division. Prior to her termination in July 2010, the KID board took issue with Rupert’s use of sick leave to attend trial proceedings related to injuries she previously sustained in an automotive accident.

The plaintiff, in her Washington Employment lawsuit, claimed that her wrongful termination was due in part to her allegations of misuse of funds after a former member of the KID board of directors had attempted to purchase land on Red Mountain by utilizing an endowment fund earmarked for an initiative identified in the report as the Red Mountain project.

The plaintiff was initially placed on administrative leave before her ouster, according to the report.

More WASHINGTON EMPLOYMENT LAW News
Washington State Employment Laws are designed to protect workers against unjust and unfair practices in the workplace. Rupert thought her wrongful termination was unjust according to Washington State Labor Law, and sought justice through the courts.

However, according to the report, Benton County Superior Court Judge Vic VanderSchoor granted the district’s request for a summary judgment without orally stating reasons for his decision. The ruling was in favor of all claims made by the District save for a claim for unpaid wages, a claim which was subsequently nullified following the ruling.

Once VanderSchoor delivers his written ruling, the plaintiff has 30 days to appeal. Rupert’s Washington Labor Law attorney is recommending that his client follow through with an appeal, stating that in his view the judge erred in dismissing Rupert’s case without any explanation of his reasoning.

Posted by
Angela montes
on March 7, 2016
I am seeking legal advice in a hostile work environment,fowl name calling,and much more. We several workers came forward on this misconduct they were given warning to sign or be terminated. I need legal advice as I have a short time frame to sign the statement.