A group of janitors suing retail giant Fred Meyer are not looking to “clean up” as it were, but rather are seeking justice and due compensation for work performed off the clock in Washington state. The Washington Employment class action names as defendants Fred Meyer, as well as a number of subcontractors in a case due to be heard in April. 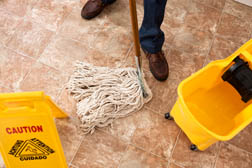 According to KPLU 88.5 Seattle (1/4/16), the plaintiffs were directly employed by a subcontractor to Fred Meyer. The subcontractor, MH Janitorial, was accused of not paying janitors for work performed off the clock at the end of their shifts in accordance with Washington State Employment Laws. Off-the-clock work is a growing problem, with many employees called upon to perform tasks either before their scheduled shift or after they have clocked out for the day.

Plaintiffs assert that such tasks, sometimes for just a few minutes and sometimes longer, constitute work performed for the employer on the employee’s own time - work for which the employer is not paying. Those minutes can add up over time.

According to the KPLU radio report, MH Janitorial is no longer operating. Thus the plaintiffs have turned their focus toward Fred Meyer, which had hired MH Janitorial as a subcontractor to supply janitorial services.

Court documents reveal that Fred Meyer placed responsibility for adherence to wage and hour laws according to Washington State Labor Law on its subcontractor. Now that MH Janitorial is no longer operating, the question is whether or not Fred Meyer can be held responsible for the failure of its subcontractor to pay wages.

More WASHINGTON EMPLOYMENT LAW News
There has been increasing pressure in labor circles for the primary contractors to share in the liabilities of subcontractors where employees are concerned. This comes at a time, according to the attorney representing the plaintiffs in the Washington Labor Law class action, when corporations are moving away from responsibility and liability for the human resources working in their facilities.

Fred Meyer, owned by Kroger, is expected to argue that since the janitors were employed by MH Janitorial, responsibility for wages and adherence to Washington State Employment Laws rests with the subcontractor, given that the janitorial staff were not employees of Fred Meyer directly. The plaintiffs are expected to argue that since the janitors performed their jobs on premises owned by Fred Meyer, and that Fred Meyer benefitted from the off-the-clock work, Fred Meyer should have a stake in the liability for the unpaid wages.

Case details were not available. A court date for King County Superior Court is scheduled for April.