Restaurant Lawsuit Could Have Implications for Overtime Lawsuits

At first glance, a minimum wage restaurant lawsuit in Philadelphia and Washington overtime lawsuits may not seem to have a lot in common, but the Philadelphia lawsuit could have implications for Washington employment lawsuits. That is because a judge has ruled in favor of arbitration in the lawsuit, preventing a class-action lawsuit from being filed. If employers in Washington follow suit, Washington employee rights might be enforced through arbitration panels. 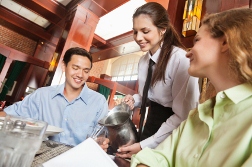 As reported by The Legal Intelligencer (12/17/13), an employee of Applebee’s filed a lawsuit against The Rose Group, owners of Applebee’s, alleging the company does not pay minimum wage because employees earn tips, but also forces employees to perform duties for which no tips can be earned. The employee alleges this is a violation of minimum wage laws.

But Applebee’s requires employees to sign an arbitration clause, forcing employees with disputes to settle those disputes through the arbitration process, not through the courts. A judge found that although arbitration clauses are often unjust, they are enforceable, meaning the employee cannot file a class-action lawsuit against The Rose Group. In other words, in order to be an employee of Applebee’s, a worker must waive his or her right to file a class-action lawsuit.

“As unappetizing as the result may be, the state of law compels this Court to grant Defendant’s motion and stay these proceedings so that Walton can arbitrate his claims on an individual basis against Defendant,” the judge wrote in his decision. Because the defendant did not prove that the arbitration clause was unconscionable, the judge ruled it was enforceable.

More WASHINGTON EMPLOYMENT LAW News
The judge noted that there are situations when an employee needs the courts to help settle disputes. “Unfortunately, mandatory individual arbitration often steps in to close the courtroom to those individuals who need to use the courts.”

Despite the judge’s finding, earlier this year a National Labor Relations Board judge found that the mandatory arbitration policy violates federal labor law. Citing a decision in an earlier case, the judge found that the mandatory individual arbitration clause prevented employees from collectively bringing class-action lawsuits and group arbitrations. Both this decision and the decision in the Applebee’s case could play a role in whether more employers will move to require employees to sign mandatory individual arbitration clauses.

Posted by
don
on January 1, 2014
The lawyers want the class action suits. You are better off doing research- your own due diligence and suing individually. Not only will this tie up the legal department and force hundreds of hours of billed time to the company but in case of a settlememt you get all your money.