Niacin Found to Be More Effective than Vytorin at Lowering Cholesterol

More News
According to a recent study from the New England Journal of Medicine, generic B vitamin Niacin was found to be more effective at reducing levels of arterial plaque than Vytorin or Zetia. 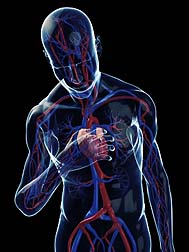 The limited study of 208 patients found that those who used ezetimibe, the active ingredient in Vytorin and Zetia, experienced greater risk of health attack, weak circulation and stroke than those using prescription strength Niacin to control their cholesterol buildup.

These findings echo concerns surrounding the medication first brought to light in the a similar study conducted last year in which Zytorin, which is chiefly composed of ezetimibe and the hypolipidemic simvastatin, was found to be no more effective at treating elevated cholesterol levels than simvastatin alone, according to a report by USA Today.

"The question is whether ezetimibe works at all," says Allen Taylor, lead author of the study, to USA Today. "Niacin has been around for 50 years. It's a well-understood drug, and in this trial it was a clear superior choice."