Congress is currently considering a bill that would protect low-income veterans' pensions if they receive a veterans medical malpractice lawsuit settlement or other such windfall. 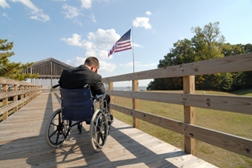 Florida Representative Alcee Hastings introduced the Veterans Pensions Protection Act after one of his constituents, a low-income veteran, contacted him, according to ArmyTimes.com.

More MALPRACTICE News
Kerry Scriber served in the Navy in the 1970s. He is wheelchair-bound due to muscular dystrophy unrelated to his service. After he and his dog were struck by a car while crossing the street, he received two checks from the driver's insurance company, one to cover his pain and suffering and one to replace his wheelchair.

Scriber turned the latter check over to the Veterans Affairs Department and also reported that he received the former check, which was for $10,000. Two days later Scriber was informed that his pension would be terminated because the settlement increased his income beyond the allowable threshold of $11,000 per year.

Scriber informed Hastings of the situation, and Hastings in turn introduced to Congress a bill that would protect veterans like Scriber from losing their pensions. It would also protect similar pensions held by those who receive a medical malpractice award against a VA doctor.

"It disheartens me that veterans are overlooked and mistreated due to flaws in VA regulations," Hastings said.
READ ABOUT MALPRACTICE LAWSUITS