A 38 Year-old man with a long history of traffic violations put two people in hospital this month, when he lost control of his vehicle, in what would become a bizarre truck accident. At about 7:30 in the morning Timothy Newton was driving a New England Delivery box truck carrying highly flammable medical supplies bound for Franciscan Children's Hospital, when he lost control of the vehicle. 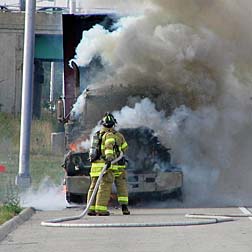 The first thing Newton hit was a pick-up truck heading west on Babcock Street, and it ended up plowing into fence. Newton then went on to hit several parked cars, sending one through a storefront window, then finally stopping at Brighton Avenue where it burst into flames.

According to Boston fire Chief, Steve McDonald, one car rammed into a pole on a sidewalk, and another went into a nearby building. Apparently, the truck was coming up Commonwealth Avenue going westbound. In total, eight cars were involved, as the truck careened through the Allston neighborhood in Boston, then came to halt and burst into flames.

The two people who were injured were rushed to Brigham and Women's Hospital, with non-fatal injuries, and Newton suffered a broken leg.

Reporters at a local TV station discovered that Newton has a history of driving violations, including a license suspension in 1997 following seven violations or accidents. Then in 2005 his license was suspended again, to be reinstated in 2007 after he successfully completed a driver safety course. His driving record contains a total of 61 entries from traffic violations in a number of cities, violations which include speeding and failure to stop.

So what happened this time? According to a friend of Newton's, he thinks he blacked out at the wheel. He really didn't remember what happened, although he did seem to remember hitting the gas pedal instead of the brake.

The scene of the accident was treated as a Level 3 Hazardous materials scene because of the cargo the truck was carrying. And, several buildings had to be evacuated while the scene was cleared. At noon Commonwealth Avenue remained covered in debris, but by then the police had determined that the contents of the truck were not in fact dangerous.

More News
Each year approximately 42,000 people are killed on the nation's highways, with truck-related crashes accounting for approximately 5,000 fatalities. In 2005, 442,000 large trucks were involved in traffic accidents. Of those, 114,000 involved injuries, and 5,212 (12 percent) were fatal, and one out of eight fatalities resulted from a collision involving a large truck.

Luckily, no one died in this Boston accident. However, it did result in injury and an enormous amount of inconvenience and damaged property. It occurred during the morning rush hour, just a few blocks away from Nickerson Field at Boston University, seriously impacting people trying to get to school. One of the vehicles that was hit ended up on the Green Line MBTA tracks, which resulted in a suspension of service for several hours, causing a major hassle for commuters.

"All the colleges, BC out, BU inbound, people going to work, the Kenmore Square area, the Back Bay area, so (the impact is) significant," a Boston patrolman said. Welders had to cut through MBTA metal fencing to free the truck that was sent careening into nearby track area.