“I suffered so much pain trying to get this transvaginal mesh removed that my teenage daughter begged me not to have another surgery,” says Patricia. “But after two surgeries, bits of mesh are still in my body and I have no choice.” 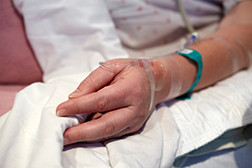 Patricia was implanted with a transvaginal mesh sling to correct a bladder problem. Right after the surgery Patricia started bleeding and continued to do so for nine months. Her gynecologist kept telling her that nothing was wrong! Instead of removing the mesh, Patricia’s doctor added more - she thinks he did so to try and stop the bleeding. And instead of correcting the mesh problem, adding more mesh was like throwing another log on the fire.

“Having seen me go through two surgeries in an attempt to remove this mesh, my daughter thought I was going to die if I went through another one,” says Patricia. “An ultrasound and CT Scan showed it had migrated and eroded all over my abdomen. The pain I endured with the last surgery was nothing like you can imagine - it makes giving birth feel like a cramp.” Patricia needs more surgeries to remove this mesh mess but she is putting it off for a while.


“I just need a break from it all.”
Unfortunately, transvaginal mesh revision surgeries are on the rise, just as more women have had it implanted. Some women have undergone multiple surgeries. Four years after Janet Holt had the mesh implanted to correct pelvic organ prolapse (POP), she needed seven surgeries to remove it.

Christine Scott underwent eight surgeries and nine additional procedures in an attempt to correct the internal damage caused by the transvaginal mesh. At trial, Scott’s psychologist testified the plaintiff would require psychiatric care for the rest of her life.

According to Science Daily (February 2016), new evidence highlights benefits and harms of using artificial transvaginal mesh when compared with tissue repair in the surgical treatment of POP. “Across all the studies, 8 percent of women who had mesh implanted subsequently had it re-operated. In Scotland, the Health minister called for hospitals to consider the suspension of mesh operations until more evidence is available.”

More TRANSVAGINAL MESH News
Barely six months before the above study was published, JAMA Surgery reported a follow-up of nearly 60,000 women who received a synthetic vaginal mesh sling for the treatment of stress urinary incontinence. Researchers found that “the risk is low for needing a second surgery for mesh removal or revision…about one in 30 women required revision surgery 10 years after receiving transvaginal mesh implant.”

In the past, the FDA has considered all transvaginal mesh surgery equal, i.e., female stress urinary incontinence (SUI) and pelvic organ prolapse (POP) are under the same mesh umbrella. But new evidence indicates that “intervention rates for mesh-based complications in procedures for SUI appear to be lower than those associated with procedures for pelvic organ prolapse,” according to the JAMA Network Journals. Regardless, women suffering from SUI or POP would agree that one revision surgery is one too many.

Posted by
Ruth Burris
on June 6, 2016
My mother had a transvaginal procedure for a prolapsed bladder. After a month her bladder prolapsed again . She has been having problem after problem ever since.