Men are also victims of transvaginal mesh. Legally it’s called loss of consortium. At home it’s called pain and no sex. And sometimes the mesh ends a relationship. 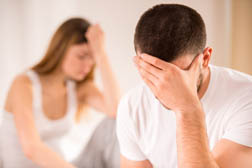 Arnie’s wife had urinary incontinence and, like so many women, trusted her doctor when he advised her to have a transvaginal mesh sling. “The first time we had sex after waiting a few months after her surgery she complained of pain,” says Arnie (not his real name). “I have been telling her for months that it tears my skin tissue on my penis during intercourse, it is causing shredding on my penis and causing us to not have sex, and now we are getting divorced.”

If Arnie’s wife was able to have the mesh removed sooner, their marriage might have been saved. Again, she didn’t question her doctor or research the TVT before having the implant. “She asked her doctor if the mesh could ‘nip’ my penis during sex,” Arnie adds. “He said the mesh couldn’t possibly hurt me and I must have cut my penis on something. I would know if it was something else. This doctor made our relationship worse - perhaps my wife doesn’t trust me now.”

Loss of consortium means the inability of one’s partner to have normal sexual intercourse. This loss arises as a claim for damages when the partner has been injured and cannot participate in sexual relations for a certain length of time or permanently due to physical injury or mental distress due to a defendant’s (in this case, the transvaginal mesh manufacturer) wrongdoing.

“My wife is currently on another round of antibiotics. She has had one infection after another since getting the mesh implant and normal sex is no longer pleasurable,” says Ron. “She needs to get this stuff taken out but she can’t find a doctor to remove it. I can’t believe the surgeon who implanted this mesh won’t take it out. We haven’t had sex for almost a year; it’s got to the point where I might have to pay for sex. I should get reimbursed from the mesh maker for that too!”

Bits of eroded transvaginal mesh can protrude through the vaginal wall and can cut the penis during sexual intercourse. As well as pain, a hematoma (a collection of blood under the skin) could develop on the penis. Lacerations of the penis may be serious: it can cause damage to blood vessels and nerves.

More TRANSVAGINAL MESH News
Barbara and her husband Steve filed a transvaginal mesh lawsuit that includes loss of consortium. “Since I had this transvaginal mesh sling for incontinence problems, I constantly have vaginal infections with itching, a nasty discharge and inflammation. And I have full-blast incontinence! Sex is out of the question,” said Barbara. Steve said they are also “considering a lawsuit against the ob-gyn who elected to use the mesh without warning us of its potential damage and risks - surely he must have known.” But he may not have known. And he may not know how to remove it - that part wasn’t in the training manual back in 2008.

A California jury in 2012 found that Bard, the Avaulta transvaginal mesh maker, was negligent and returned a $5.5 million verdict for plaintiff Christine Scott, including $5 million for her medical expenses, pain and suffering and other damages, and $500,000 for her husband’s loss of consortium claim.

Posted by
Tom
on December 27, 2018
My wife and I was part of a class action suit against Boston scientific, NEITHER of us approved of a class action suit.... The attorney on that case dropped my loss of consortium suit without notifying me. My wife settled on $40k AFTER at 26 years of age had to have a hysterectomy and is currently in pain management for the rest of her life which my family is paying for. My family needs help by way of representation, isn't there one decent attorney on this planet?