The first of many scheduled court cases alleging that transvaginal mesh devices caused harm to thousands of American women was being closely watched. And a West Virginia judge’s decision in February to dismiss Carolyn Lewis’s personal injury case against Johnson and Johnson (J&J) caused some surprise, but will not deter other cases from going forward. 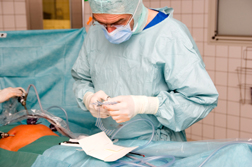 US District Judge, Joseph Goodwin, found for the defendants, Johnson and Johnson, and ruled that there was not enough evidence to show that a pelvic mesh device was a defective design or that it caused pain and injury to Lewis, who is from Texas.

“We believe this was likely one of the weaker cases, and the judge applied Texas state law since this was a Texas case,” says Dr. Shezad Malik, a Dallas attorney and physician, who is currently handling more than 100 personal injury cases involving transvaginal mesh products made by Johnson and Johnson, Bard, Boston Scientific, and Endo Health Solutions.

Carolyn Lewis’s case is just one of the more than 12,000 claims against J&J related to the safety of its TVT Retropubic slings. Lewis’s sling was implanted to deal with incontinence issues. Although J&J contends its transvaginal mesh products are safe, the company curtailed sales of the devices last year.

“We are still full steam ahead,” says Dr. Malik. “This is kind of a fluke verdict. We believe there is more than sufficient evidence in other cases to show that vaginal mesh manufacturers knew or should have known that there was a defect in their polypropylene mesh, and there is sufficient causation to show these women were injured as a result of the defective product.

More TRANSVAGINAL MESH News
“We are getting new cases all the time,” says Dr. Malik. “We continue to file cases, and we have another group we are going to be filing shortly that is underway right now.”

As one of the few physician-attorneys in the US, Dr. Malik and his firm are uniquely positioned to evaluate these types of cases.

“We do have a detailed understanding of female anatomy,” says Dr. Malik. “We know what these devices are, when they were implanted and why they were implanted. That means we can assess the situation and determine whether the injuries the women are struggling with are due to the device or whether it is due to a known complication from this type of procedure.”

“Although I am not a urologist or a gynecologist, as an Internist and Cardiologist, I can determine which injuries should go forward to litigation and which should not,” adds Dr. Malik.

Posted by
Dean
on April 3, 2014
My wife had the (Transvaginal Mesh a J&J product) put into her body four years ago and let me tell you something she was absolutely fine before having this Mesh put into her. She has had nothing but problems from day one, my wife so fare has had a partial removal of the Mesh and now she has to go to UCLA for more surgery to get as much as the Drs can take out of this Mesh made by J&J. So to read something where these big corporation's are not taking the responsibility that they have ruined so many lives not just these poor women who had the Mesh put in but there love ones to is appalling. It does not make any sense at all where other smaller companies so to speak have to pay there dues for there mistakes in making this Mesh and sending it out to be implanted into thousands of females. Why should a bigger company so to speak like J&J be let of the hook just because they SAY that there product isn't doing any of the damages in these poor women its disgusting I hope that justice is done right.