It's a miracle no one was hurt or killed in the December 15 train crash. It was 7:40 pm on a Sunday evening when a 66-car train loaded with new vehicles partially derailed in an area of tracks that bisect the Roanoke tourism and business district. Media reports indicate a fence along Norfolk Avenue was flattened, and one derailed car wound up on a pedestrian sidewalk adjacent to the Taubman Museum of Art. 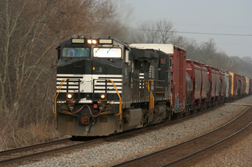 Had the train derailment happened during a weekday or early evening, the consequences could have been far worse.

The Roanoke Times reported on December 14 that five car carriers derailed within feet of tourist attractions in the heart of the Virginia city. The cars were bound for an automotive distribution center in Petersburg after originating in Melvindale, Michigan. The carriers, with obvious heft, contained a collection of 47 new Ford and Chevrolet vehicles.

Many of the vehicles were damaged after several of the carriers tore open on impact.

The train wreck also happened within feet of the Taubman Museum of Art, a $66 million facility that houses a number of priceless artifacts. Officials checked both the collection and the building following the train accident and pronounced everything was in order.

Critics have long blasted rail companies for having rail systems pass through populated areas. Vibrations from cars passing along rails close to buildings have been known to crack foundations, and various individuals have been injured or killed over the years when signals have failed to warn motorists of an oncoming train.

However, proponents of rail will defend the industry, saying that rail lines installed on the outskirts of a community more than a hundred years ago are now in populated areas by default, due to urban sprawl.

More TRAIN CRASH News
This particular train derailment involved the Norfolk Southern line, and such accidents appear to be a fact of life. The Federal Railroad Administration (FRA) reports there have been no fewer than 116 between January 1 and September 30 this year alone involving Norfolk Southern—possibly as many, on average, as two or three per week.

Previous Roanoke train wrecks include a January 1989 derailment that saw seven coal cars derail behind the Virginia Museum of Transportation. In December 1990, two grain cars spilled their loads beneath the Fifth Street bridge during a switching operation. No one was hurt in either incident.

In an unrelated derailment, five cars carrying coal tipped December 17 after a train derailment at West Fargo. Officials reported no chemical spill in the train crash, and no coal was lost.

Posted by
Traindriver
on December 21, 2010
Critics have long blasted rail companies for having rail systems pass through populated areas. Now wait just a second...I would venture to say that the railroad right of way (Trains and tracks) were in place long before...decades if not a century...before the areas became 'populated.' Don't blame the railroads. Why build a $66M museum next to an active rail line? And people complain about railroad noise near their homes...did they not ' Stop/Look/Listen' before they purchased their home?