More TRAIN CRASH News
A tractor trailer was at the center of a recent train accident that took place early Monday morning and left one man in serious condition at a local hospital. 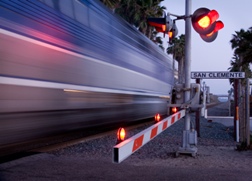 Investigators are still trying to determine the direct cause of the incident, which occurred around 10:30 am. What is known is that the driver of the rig ignored warnings or was unable to stop in time for the train as it crossed Statesville Boulevard near Chaver Wood Products. The trailer was struck violently on its passenger side and allegedly dragged for several feet before bursting into flames.

Three citizens in the area rushed to the aid of the truck driver, pulling him from the flaming wreckage in time for ambulances to transport him to a nearby hospital in Iredell County. The driver is listed in serious condition and at least one of the responders is being treated for smoke inhalation.

Official reports indicate that the train was not derailed, and normal traffic resumed in a matter of hours, according to WSPA.com.

If you or a loved one have suffered losses in this case, please click the link below and your complaint will be sent to an automotive accidents lawyer who may evaluate your Train Crash claim at no cost or obligation.
Request Legal Help Now