To lose one quarter of a retirement plan in one day sends shock waves through future plans and security. When WellPoint Inc. announced a sharp drop in its profits on March 10, 2008, and shares plunged 28 percent the following day, Lillian was not able to safeguard her stock option based 401(k) fast enough.

"My money was going into the company stock through a 401(k) plan at the rate of six percent of my income," says Lillian, a five-year employee responsible for retrospective reviews and authorizing health coverage for the largest U.S. health insurer by membership. Back injuries and an unsupportive work environment led to her dismissal from the company. "But although I had left the company four and a half months before, there was no reason to worry about the stocks. 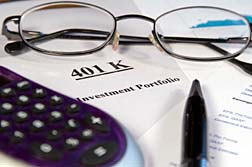 I had always followed WellPoint stock; I used to check in on the numbers on my account. I'd watch it, especially since I put in a certain amount every month and the company would match. The stock did well.

Then a colleague, who was still working there, told me about this announcement that WellPoint had just made to employees about a drop in the company's profit. That announcement came the day before the stocks dropped. The very next day, I moved my money out of the 401(k) and into an IRA but by then I'd lost 25 percent. Everyone did.

Due to the financial loss, I have less time and finances to start my own business as a psychotherapist, and I've suffered emotionally, mentally and psychologically as a result of the company shift (and from being let go).

I'm 58 year old though and I've learned to roll with the punches," concludes Lillian. "It's the young people with families I feel bad for, those who have bought into the stock options every three months and who were saving up for a vacation - if they lose that, it's devastating."

Few employees or former employees can take their losses in stride. According to the Indiana Business Journal website, four ex-WellPoint Inc. employees are suing the Indiana-based company for allegedly breaching its fiduciary duties by failing to warn its 401(k) participants of its alarmingly poor performance.

More STOCK OPTIONS News
Indeed, on March 10 the giant health-insurer stunned Wall Street and its own employees by announcing a cut to its profit outlook, citing high costs, disappointing enrollment and worsening economic conditions. Stock value tumbled, costing stockholders over $115 million. These recent lawsuits were filed between March 15 and May 29 in a federal court in Indianapolis. An attorney representing one of the plaintiffs, a former claims processor and service clerk, alleges that WellPoint was fully aware of the stock's declining value.

Class action status is also being sought on behalf of the almost 49,000 present and former employees who participated in WellPoint's 401(k) plan. Furthermore, they are accused of knowledge that the inflated company stock made for an unwise investment for the ERISA fund. According to the 1974 ERISA law, under which WellPoint is being sued, a company becomes accountable if they are deemed to have knowingly put the employees' stock option investment at risk.

If your company stock options have depleted your 401(k) plan, legal consultation will clarify your position and next step.