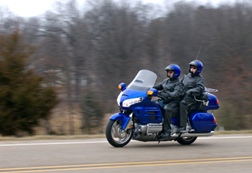 According to the news provider, a teenager from Willard, Missouri, and a woman from Bolivar were injured in the motorcycle crash.

The report from the Missouri State Highway Patrol indicates that 66-year-old David R. Zimmerman from Springfield was driving his 2002 Chrysler PT Cruiser when he attempted to make a left turn.

At that point, a 2003 Yamaha motorcycle driven by 19-year-old Dylan R. Alexander came over the hill and hit the car head-on, according to the report. Alexander and his passenger, 20-year-old Ashley N. Eagan, were reportedly both wearing helmets but sustained minor to moderate injuries, the report said. Alexander reportedly refused treatment at the scene of the accident, while Eagan was transported via ambulance to St. John's Hospital in Springfield, according to the news provider.

According to the Web site for the Missouri State Highway Patrol, approximately one percent of all Missouri traffic crashes in 2009 involved motorcycles.

If you or a loved one have suffered losses in this case, please click the link below and your complaint will be sent to an accidents lawyer who may evaluate your Springfield Missouri Motorcycle Accident claim at no cost or obligation.
Request Legal Help Now