Send your Springfield Missouri Motorcycle Accident claim to a lawyer who will review your claim at NO COST or obligation.
GET LEGAL HELP NOW 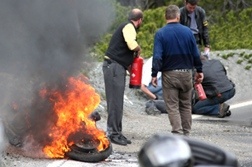 According to the National Highway Traffic Safety Administration (NHTSA), 107 motorcyclists (including motorcycle drivers and motorcycle passengers) were killed in Missouri traffic crashes in 2008. In 2007, 92 motorcyclists were killed and in 2006 there were 93 fatalities. 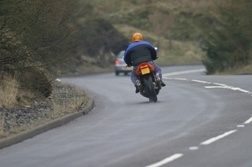 Missouri uses the principle of pure comparative negligence when determining accident liability. This means that in the case of a motorcycle accident, the injured party can recover damages for his injury even if he was 99 percent at fault for the accident. In this situation, however, the victim's awarded damages are reduced by the amount of fault he is responsible for. For example, if the injured party is 50 percent responsible for the accident, his award is reduced by 50 percent.

In Missouri, it is illegal to drive with a blood alcohol concentration (BAC) of.08 or higher. In Missouri, Driving Under the Influence (DUI) is the same as Driving While Intoxicated (DWI).

If you or a loved one has suffered damages in this case, please click the link below and your complaint will be sent to a lawyer who may evaluate your claim at no cost or obligation.
Please click here for a free evaluation of your Springfield Missouri Motorcycle Accident claim
Last updated on Sep-7-10