Two drivers were injured in a recent Springfield motorcycle accident near Shell Knob in Barry County, reports the Joplin Globe. 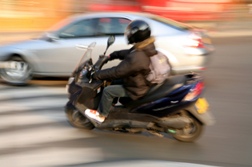 Trevor C. Messbarger, 24, and Shane P. Fancher, 27, both of Cassville, Missouri, were reportedly taken to nearby St. John's Hospital in Cassville with moderate injuries, according to the Missouri State Highway Patrol.

Of the motorcyclists in 2009 crashes that wore a helmet, 27.5 percent were either killed or received a major injury, while 40.9 percent of those who did not wear a helmet were killed or suffered a major disabling injury, the Web site said.

If you or a loved one have suffered losses in this case, please click the link below and your complaint will be sent to an accidents lawyer who may evaluate your Springfield Missouri Motorcycle Accident claim at no cost or obligation.
Request Legal Help Now