Two new drugs recently recommended for approval by an advisory committee of the US Food and Drug Administration (FDA) for the treatment of hepatitis C may pose a risk for skin rash that could bloom to Stevens Johnson Syndrome, according to an entry published online April 30 in The AIDS Beacon of Princeton, New Jersey. 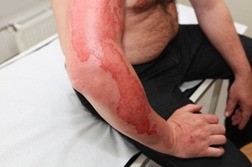 However, concern over SJS and skin rash has also been part of the discussion, according to reports.

Among a host of serious side effects associated with the two new drugs proposed is skin rash that could lead to Stevens Johnson Syndrome skin disease. Three patients participating in a drug evaluation trial involving telaprevir developed a life-threatening skin rash that was suspected to be SJS. It was reported that several of the FDA advisory committee members were concerned when apprised of the cases, which involved three of the 2,200 telaprevir trial participants.

Roughly 300 individuals in the US are afflicted with some form of Stevens Johnson Syndrome rash each year. The condition, thought to be triggered by an adverse reaction to medication, remains extremely rare.

However, it remains a concern due to the fact there doesn't appear to be any pattern governing who might be susceptible. At its worst, SJS can be life threatening, as the disease affects the top layer of the skin in similar fashion to a burn. Many SJS patients are treated in burn units.

Some Stevens Johnson Syndrome patients have died. Others have taken months to recover. Still others have been blinded after their eyes were permanently affected.

Were HCV still detectable at 24 weeks, or 12 weeks of treatment for treatment-naïve and treatment-experienced patients respectively, Merck recommends discontinuing treatment with all three drugs.

Dosage guidelines for telaprevir are less complex but remain a challenge. And what happens if patients develop a Stevens Johnson Syndrome rash? Should the hepatitis C medication be stopped right away? What is the downside of stopping such a complex medication abruptly? Would continuing the drug foster the risk that a skin rash might mushroom into something more serious, such as Stevens Johnson Syndrome? Such questions would have to be answered, and concern put to rest by the FDA before approving the drugs. The benefits must outweigh the risks.