A new Stevens Johnson syndrome lawsuit has been filed alleging a child suffered from the serious condition after taking medication for a cold. The lawsuit was reportedly filed by Charlene Monk against Johnson & Johnson and Wal-Mart after her six-year-old daughter was diagnosed with SJS following a severe allergic reaction to medication. 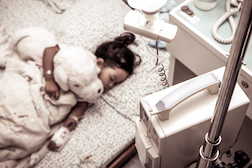 According to Courthouse News Service (11/4/16), Monk's daughter was treated with PediaCare Multi-Symptom Cold medication that contained acetaminophen in October 2014 and a few weeks later was given a generic children's ibuprofen to treat a fever. Within a day, she had a high fever, sore throat and difficulty urinating, so she was given more ibuprofen and taken to hospital. After being misdiagnosed with a urinary tract infection and told to take more Tylenol and ibuprofen for her fever, Monk's daughter awoke with her skin peeling off her face.

The patient was then diagnosed with Stevens Johnson syndrome. She survived, but was in a burn unit for 43 days while her symptoms spread to 60 percent of her body. She then spent another 37 days in inpatient rehabilitation. The young girl has permanent scarring of her face and a bone condition.

Monk and her husband filed a lawsuit against the Johnson & Johnson, Wal-Mart, and other companies associated with making or selling the drugs she purchased to treat her daughter.

Stevens Johnson syndrome is a rare allergic reaction to medications. It and its more severe form—toxic epidermal necrolysis—can be fatal. Although some patients do survive their ordeal, they often suffer permanent scarring, organ damage, and vision problems. Stevens Johnson syndrome can be difficult for doctors to diagnose because its early symptoms are similar to symptoms associated with a flu or other infection. In such cases, medical professionals may inadvertently prescribe the medication that is triggering the allergic reaction.

According to the Stevens Johnson Syndrome Foundation (sjssupport.org), the symptoms of Stevens Johnson Syndrome include persistent fever; swelling of the eyelids; flu-like symptoms; blisters in the eyes, mouth, ears, nose, and genital area; rashes, blisters, or red marks on the skin; and conjunctivitis. Patients who have two or more of the above symptoms and have recently taken a medication—even a medication that was previously tolerated with no reaction—should seek medical attention immediately.

More STEVENS JOHNSON SYNDROME (SJS) News
Lawsuits have been filed against a number of drug makers whose medications are allegedly linked to an increased risk of Stevens Johnson syndrome. One such lawsuit resulted in a $63 million award to the family of Samantha Reckis, who developed Stevens Johnson syndrome and toxic epidermal necrolysis when she was seven years old, after being given repeated doses of Children's Motrin. Reckis' family filed a lawsuit against Johnson & Johnson for failure to warn, and a jury awarded Reckis and her family $63 million. Johnson & Johnson appealed the award but the US Supreme Court refused to hear Johnson & Johnson's appeal.

A different lawsuit resulted in an award of $10 million to Brianna Maya, who was three years old when she developed Stevens Johnson syndrome after taking Children's Motrin and Children's Tylenol. Her family filed a lawsuit arguing that had the known about the symptoms of a serious allergic reaction, they would have stopped using Children's Motrin immediately upon her first symptoms, rather than continuing to treat her with the medication.

If you or a loved one have suffered losses in this case, please click the link below and your complaint will be sent to a defective products lawyer who may evaluate your Stevens Johnson Syndrome (SJS) claim at no cost or obligation.
Request Legal Help Now

Posted by
Ana paura
on November 19, 2016
Im being charged with physichal child abuse . i took my daughter to the er thinking she had suffered a oover the counter medication accidental overdose.on my way to the hospital i administered 2 caps of childrens benadryl allergy pkus congestant. The hospital said that i had scalded her face because she had 2 identical round blisters on her face. Then they did a urinalysis and said she was positive for meth whwn in reality she was positive for amphetimine wich one of the ingredients in the chidrens benadryl will and has been k own to cause false positives.i was escorted out of the hospital after being read my rights and they put a poloce hold on her and i haventseen her since. I think she might have suffered steven johnson and nobody will listen.over all they never treated her for what i brought her in there for.she tokd me that after the. Motrin she started feeling itchy. Pkease help me. How can i get her to be seen and diagnosed correctly. I did not lay a hand on my child and she will
Tell anyone im sure who ask her the truth. There wad three people who were witness to my not doing anything to her ruby my six year old who im talkibg about. Justin my ten year old son and their papa eddie who is 80 years old
The thing is i wasnt there when it hapoened i had asked ed to get her some motrin because we had run out day before and she was running a 101 fever. So he did and he administers. The medicTion and soin after he calls me to telk me shes acting funny. I ask him to bri g her to me and i meet them outside and assess the situation and decide thatvit was bestto take her to the hospital. Soin after we arrive and they profile us. Soon as i register her . they see the dilated pupils and by this time she is hallucinating and she had threw up right before we got out of the car. All so that we could be treated by the staff like criminals. They were hostile and had made up their minds about her diagnosis. I feel line its an injustice. Tgey escorted me out of that hospital with out doung a secondary test to illiminate false posites for drugs and seperated us when she needed me the most. I was told she lost conciousness there after and was intubated and stayed in icu for about a week. This was on 10/23/16 and today is 11/19/2016 and i still have not seen her to see if shes okay. I havent been able to talk with her or my son. They toik them in to protective custody at the hospital. I have the telephone call recorded on my phone .i had downloaded an app that recorded every conversatthatwith out manually setting it up. I did not know this or i would have pkayed the phone call for the police on that sunday night. My biggest fear is that she might still need treatment and no one will listen. She was misdiagnosed that evening and she deserved better care than dhe received. My past is not the past of an angel. I have had substance abuse in my life. I believe that that is why it was so much easier to believe that i had done simething to her than to listen to what we were telling them the chain of events tfor that night.i have court on monday a custody hearing and no evidence or proof or an attorney to help my case. All i have is the truth behind me and it has carried me along feeling strong and courageous. But i did the rigjt thing that evening and i hope it made a difference for her. In the hospital i read the report where they treated her with antibiotics. What i dont understand is;would theyof not of realized that they misdiagnosed her? She was there for a whole week.are they hiding something? To be able to diagnose her properly they need a biopsy of the skin where the blisters or burns appeared. They were perfectly round identical one on each cheek.what hapoened to her that night? Can some one help PLEASE!
Desperate and worried in las vegas, nv Ana p.7