Supreme Court Will Not Hear Appeal of $140 Million SJS Award

The US Supreme Court will not hear Johnson & Johnson’s appeal of the $140 million verdict in a Stevens Johnson syndrome (SJS) lawsuit related to its Children’s Motrin medication. Johnson & Johnson was found by a lower court to have failed to adequately warn patients about the risk of SJS, a potentially fatal and life-altering allergy to medication. The $140 million award was issued by a Massachusetts jury in a lawsuit filed by Samantha Reckis in 2007. 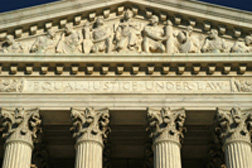 Reckis was then incorrectly diagnosed with measles and given additional doses of Children’s Motrin, until she was rushed to the hospital and diagnosed with TEN. She was put into a month-long coma, suffered heart and liver failure and experienced a stroke. She is now legally blind, despite undergoing 12 eye surgeries.

Reckis and her family filed a lawsuit against Johnson & Johnson alleging among other things that the drug company was negligent in failing to adequately warn about the risks associated with its medication. A jury ruled in the Reckis’ favor, awarding $50 million to Samantha and $6.5 million separately to each parent.

More STEVENS JOHNSON SYNDROME (SJS) News
The award was appealed, with Johnson & Johnson arguing that the FDA would not have approved additional warnings about the risk of Stevens Johnson syndrome. The Massachusetts Supreme Judicial Court upheld the lower court’s ruling, finding that just because the FDA overruled such a warning in the past did not mean it would reject specific warning changes from Johnson & Johnson. The defendants then appealed the ruling to the Supreme Court.

According to Reuters, however, the Supreme Court has denied Johnson & Johnson’s application to have its argument heard.

Although the initial award was for around $63 million, with interest Johnson & Johnson could owe around $140 million.

Other lawsuits filed against drug companies whose medications were linked to SJS and TEN have also resulted in awards for the plaintiffs. Those lawsuits also alleged the drug companies failed to adequately warn about the risks of the conditions, delaying patients from receiving proper medical treatment for the potentially fatal allergic reactions.