Not that his team is in the Stanley Cup playoffs. Well, at least not this year. But on the night that the pre-eminent hockey championship launches before a sea of ribald hockey fans far removed from California, the owner of the Anaheim Ducks hockey club has resigned as Chairman and Chief Technology Officer of Broadcom Corp after allegations of securities fraud. 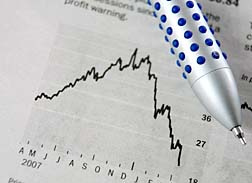 A civil complaint has been filed by the US Securities and Exchange Commission (SEC) against Henry Samueli, alleging that he backdated 232 million stock options in an effort to make them more valuable. Samueli, it has been reported, denies the allegation—and of course is presumed innocent of the charge until proven guilty. Such is the court of public opinion, however, which automatically assumes that someone is guilty the instant a charge is laid.

That said, the backdating of stock options appears to be a common, white-collar misdeed by those in the highest echelons of the corporate America. Whether motivation lay in personal greed, or as a perk to keep good people in the employ of the company, the manipulation of stock options for maximum benefit only serves to line the pockets of those exercising those options, potentially hurting the company in the process.

In other words, such manipulation throws a company's real financial performance into a dim light, and casts doubt on the accuracy of the numbers. This can in turn drive down the price of stock, which in turn limits or diminishes the value of stock held by honest, well-meaning investors. Some of those investors are saving for retirement, and may not be in a position to afford such a hit in their retirement planning.

Stock option manipulation involves sitting on a collection of stock options, and then backdating them to a date when the stock's performance was at a historical, or period high. This practice serves to maximize the return for the investor holding the options, having taken advantage of the recent trending of the stock—both the highs, and the lows.

In business, as in life, the old adage holds true: buy low, sell high. Of course, accomplishing that can be tricky. "If only I had taken out that mortgage, or the car loan last month before the interest rates went up," you tell yourself. Imagine having the ability of both hindsight, and the capacity to take advantage of that hindsight, rather than simply wishing you had pulled the trigger when you opted not to, or vice versa.

Well guess what? The white-collar evildoers convicted of backdating stock options are doing just that. Whereas the everyday investor has to play Solomon to know when to dump a stock and when to hang on, the CEO gets to hedge her bets. Take a look back at the performance graph—and simply pencil in the date at which the stock commanded the highest value. That might have been six months ago. The stock might be worth half that much today.

No matter. The CEO gets the advantage, and whatever fallout happens—who loses? The individual investor: the guy going out and doing an honest day's work, taking his savings at the end of the day and investing in a company he trusts.

And what if the CEO gets canned? Well she already has her money, doesn't she? She could probably afford the fine, too. Maybe he has to tighten his belt a bit, take fewer trips to the Caribbean in winter. But no biggie. The bigger they are, the harder they fall. True enough, but sometimes the cushion they fall into is a lot softer than the plywood the everyday investor falls onto in the event of an unforeseen setback.

In the case of Samueli, the SEC has levied a civil complaint, and not a criminal charge. Thus, there is no requirement for him to relinquish ownership, or control of the Anaheim NHL franchise. "Civil litigation happens all the time," says NHL deputy commissioner Bill Daly. "That doesn't disqualify anybody from owning a franchise."

More News
Still, the issue needs to be taken seriously, when one weighs the comments of former US federal prosecutor Robert Mintz, who suggests in a report out today that Samueli has reason to be concerned.

"The Department of Justice is clearly taking a very close look," he says. "The amount of money involved, the length of the scheme and their ability to link Samueli to the alleged backdating of the options will drive their decision as to whether they should pursue this as a criminal matter."

Regardless of the way it turns out, and whether or not the allegation is proven, or proven false—the fact remains that this is no game. And if the allegations prove true and investors of Broadcom suffer losses in the fallout, there's no Game Seven, and there's no overtime. You lose.

In fact, you might be out of the game entirely…