At least three firms have been notified by the Securities and Exchange Commission that plans are being made for charges to be filed against the firms. This news comes after a 14-month investigation into interest-rate swaps in the municipal market and bid rigging of guaranteed investment contracts.

Such notices are expected to be delivered to more firms in the coming weeks.

Financial Security Assurance Holdings LTD., and Bank of America Corp who both share the same parent, Dexia SA, acknowledge that they have received the notices regarding the possible fraud charges from the SEC. The notices issued by the SEC require a written response from the recipient within 30 to 60 days.

Also receiving notice was UBS Securities LLC and JP Morgan has not yet made any comments regarding the notice.

Bank of America has not yet released a copy of the notice it received, but has stated that the notice received dealt with bidding tied to financial doings that are associated with municipal securities. 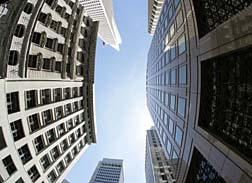 The information that FSA has released regarding their notice is more specific, stating that it has to do with bidding the firm did in association with GICs. In a statement released by FSA, they state that they are in full cooperation in regards to the notice and that the notice is a result of a 14-month investigation that does not mean there will be an adverse outcome.

Nevertheless, two of the firms who were delivered notice had offices that were raided by federal officials in late 2006 and are believed to be those most responsible for the alleged bid rigging. Both firms have yet to publicly confirm that they received the SEC's notices.

The News of the notices delivered by the SEC comes amid warnings made Friday by the chairman of the SEC, Christopher Cox, which stated the SEC was making the crackdown of fraud in the municipal market a top priority in 2008. Cox also stated that the SEC's Philadelphia-based regional municipal securities counsel, Mark Zehner, will be in charge of the task force taking care of these crackdowns.

The SEC's probe is a result of a criminal investigation conducted by the Justice Department that has been ongoing since around November 2006. What the SEC is looking at is whether or not bidding practices for various investment products were competitive or not and if the claims made by these firms stated they were competitive when no competition may have been taking place. They are also looking at whether these firms received fees that were hidden, received hidden payments, or even received undisclosed kickbacks; or the firms did not provide important information to investors or issuers.

In the meantime, the antitrust division of the Justice Department is working with the IRS's criminal investigation division and the FBI on the probe. The focus is on collusion between firms to acquire business, fix prices, and rig bids, which are considered to be anti-competitive behavior. It is believed that such transactions date back to 1992.

More News
In 2006, there were at least two dozen firms that received subpoenas to either provide documentation or make an appearance before a federal grand jury. There were many sources who stated publicly that they believed the investigations into securities fraud of these firms would have a large effect on the securities side of the market in 2007. There wasn't much else said on the matter after Bank of America's announcement in February 2007 that they had entered into an amnesty agreement with the Justice Department that prevented any kind of criminal prosecution. In exchange for the amnesty that the Bank of America received, they stated that they would cooperate fully and provide all information to the Department of Justice officials. As for the SEC's probe, the amnesty agreement does not apply.