There's nothing like a good securities fraud story at the end of the year to bring perspective to the task of wrapping everything up for the upcoming tax season. As much as we may lament the performance of our stocks and securities, at the end of the day, few of us find ourselves in the crosshairs of stock investment fraud. But some do. And just in time for Christmas, a California man was sent behind bars for securities fraud. 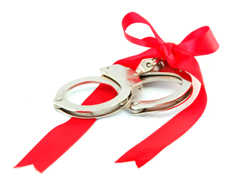 According to The New York Times, on December 22, James Fleishman was handed two-and-one-half years behind bars, together with a further two years of supervised release, for his stock fraud indiscretions.

Fleishman's sentencing followed his conviction earlier in the year. At a jury trial in September, the former sales manager for a firm in the Silicon Valley was found guilty of leaking confidential, inside information to hedge funds. The 42-year-old, one-time resident of California was associated with Primary Global Research, which billed itself as an expert networking firm.

He was convicted of conspiracy to commit securities fraud and conspiracy to commit wire fraud. The New York-based judge in the trial noted at Fleishman's sentencing that prosecutions like that of Galleon hedge fund founder Raj Rajaratnam, who was given 11 years for insider trading, has yet to serve as a deterrent to such crimes.

Fleishman was found to have shared revenue and margin numbers that he had obtained from various executives with companies ranging from Advanced Micro Devices (AMD) to Dell.

Meanwhile, California securities fraud is part of an overall securities fraud pursuit by the US Securities and Exchange Commission (SEC) against various executives associated with Fannie Mae and Freddie Mac. The SEC asserts that the two federal agencies understated the risk of their subprime mortgages at a time when investors were keenly interested in the agencies' exposure at a critical time in the nation's economy.

The state of California, having taken a serious hit by the subprime mortgage crisis, has launched California stock fraud lawsuits of its own against the two federal agencies, according to an account published in the Orange County Register on Christmas Day. Attorney General for California, Kamala Harris, served administrative subpoenas against the two agencies in November, although the federal regulator responsible for Fannie Mae and Freddie Mac has taken the position that Attorneys General at the state level lack the authority to issue such documents.

Either through stock fraud litigation or other avenues, the state of California has a lot at stake in the failed housing markets left in the wake of the subprime mortgage meltdown. The Orange County Register, for example, reports that while actual foreclosures are down (in other words, homeowners actually losing their properties), the rate of activation for such foreclosures in Orange County, specifically, is on the rise.

More SECURITIES News
What's more, the kind of California securities fraud hanging over the heads of those accused at Fannie Mae and Freddie Mac has had a domino impact on house sales, with the Orange County Record noting that two out of every five home sales today in Orange County are considered "distressed."

That's not as bad as a few years ago, when roughly half of the homes sold in the immediate wake of the subprime mortgage crisis were abandoned, lost to foreclosure or short-sold for less than what was owed. Market values plummeted almost overnight.

Little wonder that California is hoping to press its point to the SEC, and the accused executives at Fannie Mae and Freddie Mac, that the state's housing woes are worth a securities lawsuit in order to achieve some kind of compensation. After all, Americans deserve to rest assured that the root definition of "security" holds some meaning. Securities fraud litigation, on the other hand, usually suggests otherwise…