Proton Pump Inhibitors Not for Long-Term Use 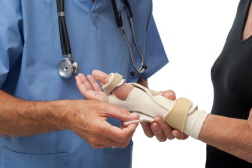 It makes sense to a lot of people: if taking a pill for a few days can clear up problems with ulcers or heartburn, then maybe taking that pill every day will stop that heartburn or those ulcers from developing at all.

That is the situation with a patient whose case history was reported by Deborah Pate in Dynamic Chiropractic on 9/23/10. The 48-year-old patient was given Prilosec and antibiotics to treat peptic ulcers. Once the ulcers cleared up, the patient continued taking Prilosec to prevent those ulcers from recurring.

The patient took Prilosec for five years and was diagnosed with a hip fracture.

Pate notes in her article that most doctors would assume the fracture was caused by postmenopausal osteoporosis. However, the patient in this case was not postmenopausal.

Nexium, Prilosec, Prevacid and other proton pump inhibitors have been linked to an increased risk of osteoporotic fractures, which occur in weakened bones. Common fractures occur in the spine and hip—areas that are normally difficult to fracture. Another common fracture site is the wrist.

More PROTON PUMP INHIBITOR News
According to the National Institutes of Health, osteoporosis is caused when bones lose minerals such as calcium and cannot replace them quickly enough. As the minerals are depleted, the bone thickness also decreases. Eventually, the bones are so thin that even minor incidents can cause serious fractures.

Proton pump inhibitors reduce the amount of acid secreted by the stomach, which scientists believe decreases the body's ability to absorb calcium, resulting in lower bone density and a higher risk of fractures. Of concern to doctors is the reported overuse of proton pump inhibitors as a preventive medication or in cases when there is no indication that patients have the conditions those medications treat.

Complicating matters further is that senior citizens and older adults are already at an increased risk of osteoporosis and serious fractures.