Concern over Rates of Depression amongst Propecia Sexual Dysfunction Patients

Propecia finasteride has, for some time, been employed as an effective solution to male pattern baldness and hair loss, a condition that usually hits most men at middle age but in rare cases can appear in men as young as 18. However, for many consumers Propecia side effects have combined to not only spoil the party on top of their once-bald pate, but to also serve as the foundation for panic between the sheets. In rare, but growing cases use of finasteride for hair growth has led to Propecia impotence. 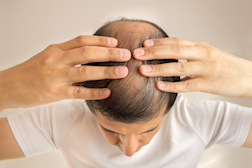 For some, normal sexual function failed to return when Propecia was stopped. Such ongoing Propecia sexual dysfunction has led many to file a Propecia lawsuit.

And now there are new concerns: according to a published report in the Chillicothe Times-Bulletin (06/28/17), there is the possibility that use of Propecia finasteride has the potential for masking an important marker for prostate cancer. Ironically, the more potent form of finasteride – Proscar – is indicated by the US Food and Drug Administration (FDA) for use in treatment of prostate cancer.


Further, recent research published online in The Journal of Steroid Biochemistry and Molecular Biology has determined that post-finasteride syndrome (PFS) patients have been found to suffer from altered levels of critical brain-function regulators, including neuroactive steroids.

The relatively small study conducted at the University of Milan’s Department of Pharmacological and Biomolecular Sciences by a team of 12 researchers led by Roberto Cosimo Melcangi, Ph.D., involved 16 participants with PFS against 25 control participants who did not suffer from Propecia sexual dysfunction.

Amongst the findings was a rate of depression at 50 percent amongst those suffering from PFS. Many having sought Propecia help for their hair loss have had to turn to a Propecia finasteride lawyer for aid in securing compensation for loss of an integral part of the male identity.