A new book by New York Times science writer Gina Kolata, which hit the bookstores last month, will come as a breath of sanity to lifetime dieters -- but not to the businesses feeding off them, including the big drug and food companies, and the weight loss industry.

Rethinking Thin: The New Science of Weight Loss -- and the Myths and Realities of Dieting, published by Farrar, Straus & Giroux, deals with the whole picture:

The central points made in the book are that diets don't work, most people are unable to lose weight, that we inherit through our genes our body size set-point, that being fat may not after all be unhealthy, and that maybe the "epidemic of obesity" is overblown. 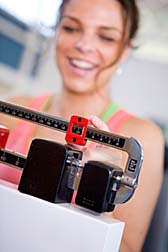 "The obsession with weight and dieting is alive and well and living in the United States, so well in fact that it will take more than one book to tame the monster.

Our weight obsession
At any given time, more than three quarters of the women in America -- 78% -- along with 64% of the men, are either dieting to lose weight or watching what they eat to keep from gaining weight. Depending upon which news story you read, between 50% and 65% of the American population is either overweight or obese.

Many women have been desperate enough to try just about anything: stomach stapling, jaw wiring, liposuction, and the diet drugs pulled from the market in 1997 -- Redux, Fen-phen and Pondimin. To illustrate the desperation felt by people struggling to get thin and stay thin, Kolata reports on one study of formerly obese people, 89 percent said they would prefer to lose their sight than their hard-won slimness, and 91 percent said they would rather have a leg amputated than return to obesity.

The unhappy story of Fen-phen and the others is well known. These pills burst onto the market in the 90s, were taken by millions of people, seemed to work wonders, and then were pulled from the market in 1997 (ten years ago), because of evidence that people taking the drugs were developing, or at risk of developing, serious heart and lung problems.

The Fen-phen legacy
Some people (mostly women, because it is mostly women who are trying to lose weight) are even now learning that they have developed Primary Pulmonary Hypertension (PPH) -- a potentially fatal disorder if left untreated. PPH causes blood pressure in the lungs to shoot up. Symptoms of PPH may include weakness, fatigue, shortness of breath, chest pain, dizzy spells fainting, and in advanced cases, bluish lips and skin swelling of the ankle and lower leg, and increased chest pain.

No losers, but some big winners...

More News
As to the epidemic of obesity, it has been shown that many of the research groups and associations making presentations about it to the government receive funding from the big drug companies and the diet industry.

The weight loss industry is said to take in $35 billion a year in the United States.

By the way, did you know that the Weight Watchers food brand is owned by H.J. Heintz Co.?

On May 31, Heintz posted fourth quarter profits which were 7.8 percent higher than the same quarter last year. Heintz says it is continuing with its growth plan involving increased marketing of its products, which include Ore-Ida frozen potatoes and Weight Watchers frozen dinners.

Wouldn't you say that the fox is in the hen house?

If you or a loved one has been diagnosed with PPH, please contact a [PPH Lawyer] who will review your case at no cost or obligation.
Request Legal Help Now